In my last post, I told you of my quick trip to the grocery and how I was quickly taken off track by a display of fish. Bacon Lobster Grilled Cheese is the fruit of that trip. 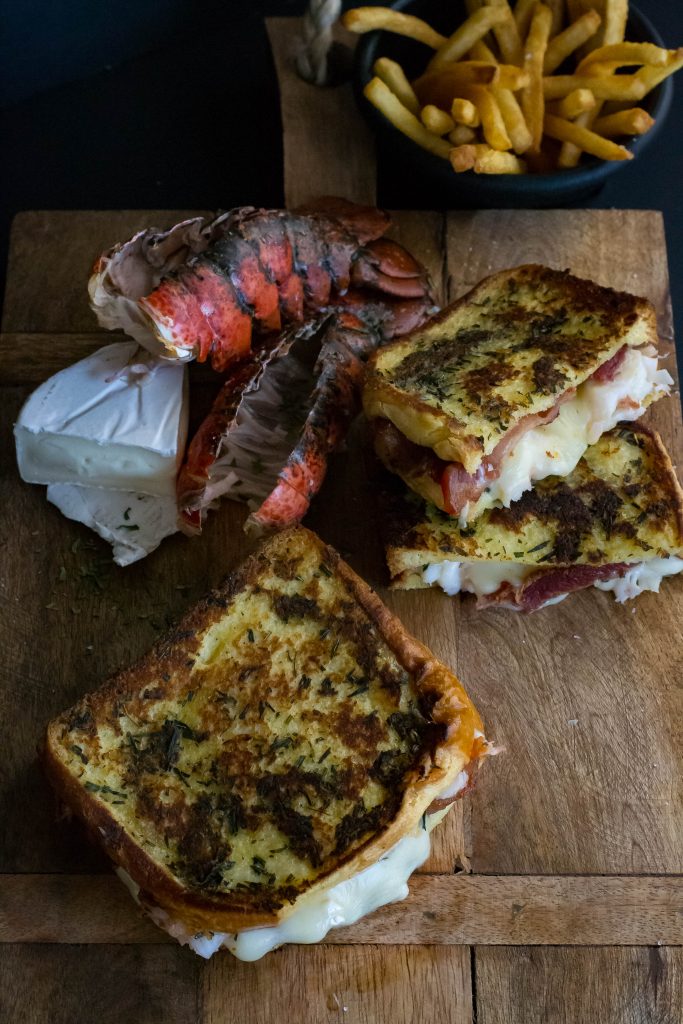 Lobster tails for $5.99?? I had to buy some right? Of course, I did. I bought two, along with the scallops that I made into Garlic Ginger Orange Scallop Wontons

Simple and rustic, nothing too complicated…how about grilled cheese? Sometimes the best ideas come from stuff you have on hand.

Bacon, in my humble opinion, goes with everything, especially grilled cheese. With the Holidays at hand, I keep extra cheese…just in case. I had bought a wheel of Brie. It’s super melty, so it was perfect, plus its mild flavor wouldn’t take away from the taste of the lobster. 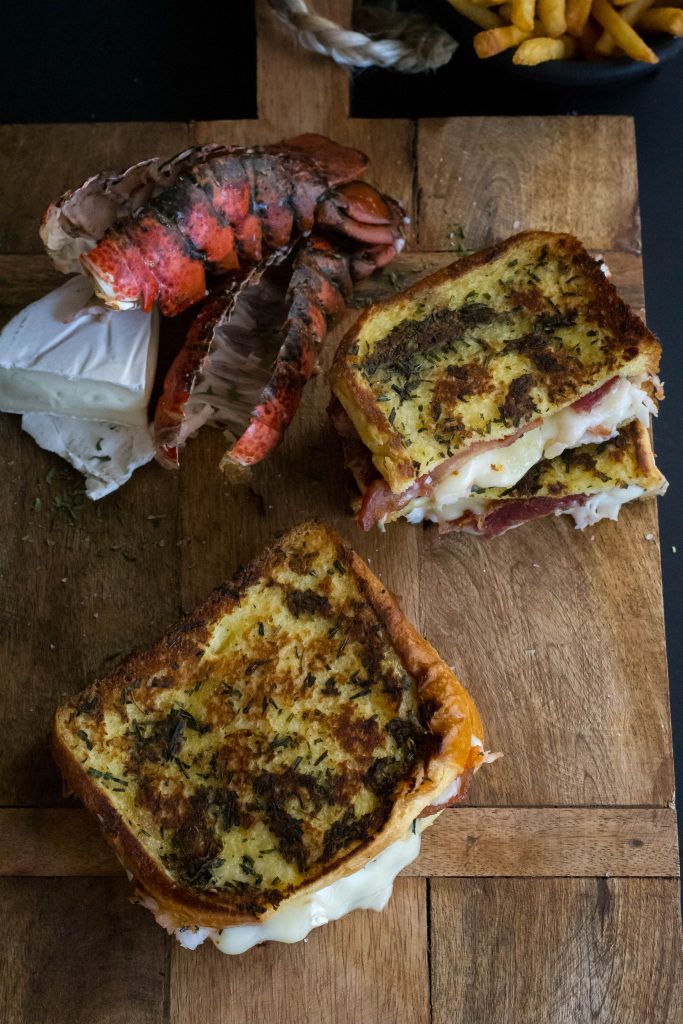 Several months ago I came across the idea of using mayo instead of butter for grilled sandwiches. Now, if you follow this blog at all you know I do not like mayo! I am of the Miracle Whip lovers tribe. So, as always mayo if you must… 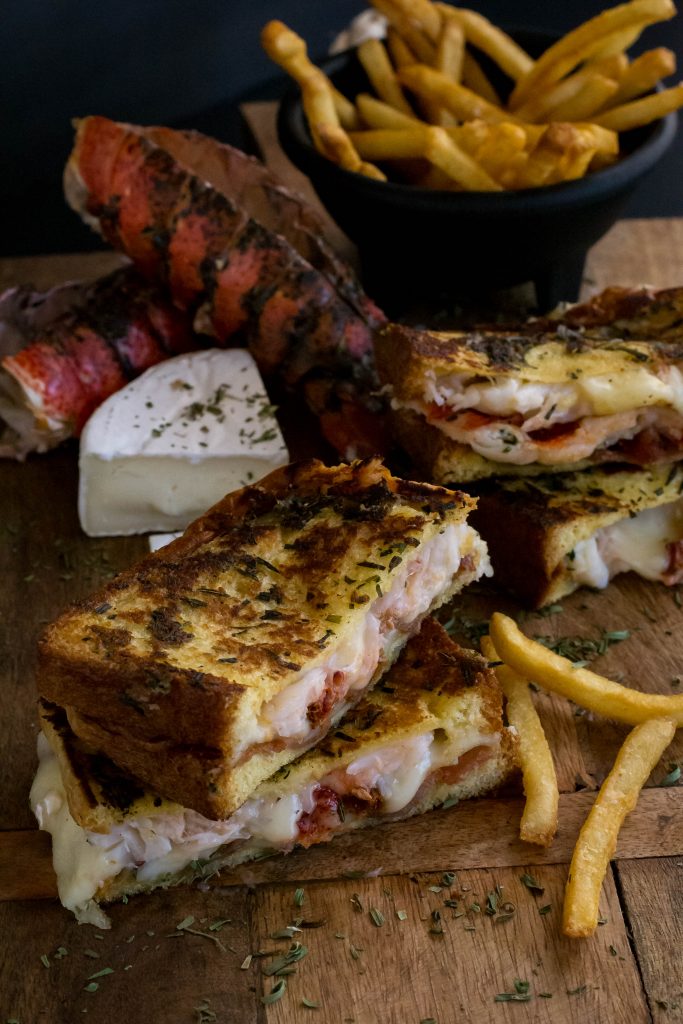 Mixing Miracle Whip, a bit of butter, tarragon, and garlic then spreading it on the sandwich instead of butter, is delicious. Tarragon complements the lobster so well.

If cooking lobster scares you, try the baking method I used. Super easy and foolproof. 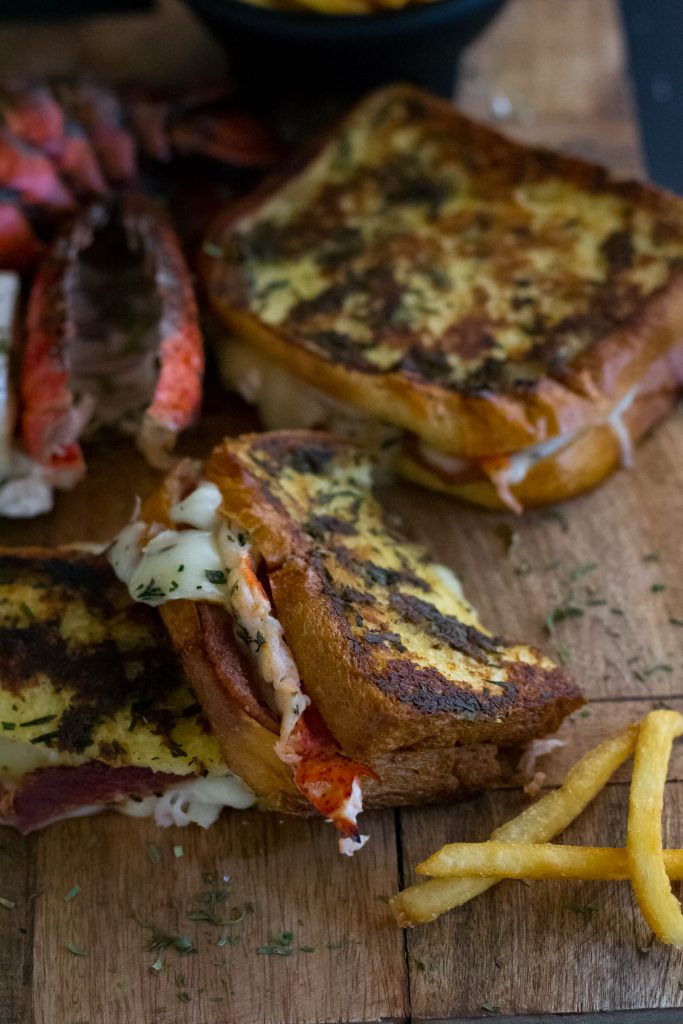 Assembling the sandwiches I used a bit of the cheese on each side. The cheese acts like glue and keeps the sandwiches together. Then fill the middle with bacon and lobster. 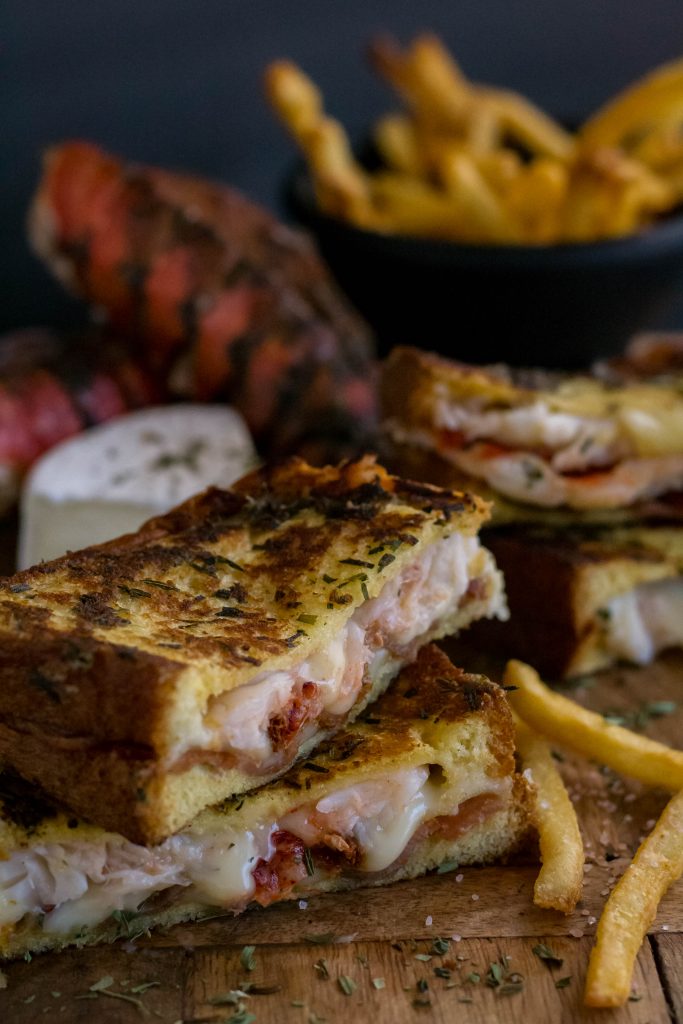 I used one tail per sandwich and three slices of bacon per sandwich. The lobster tails I bought were small, so if you have larger tails, you may get more or bigger sandwiches.

Bacon Lobster Grilled Cheese is an indulgent treat for any time of the year!

Preheat oven to 350 degrees.
Pat, the lobster, tails completely dry with a paper towel and place in a small baking pan.
Melt 1 tablespoon butter and mix in the 1/8 teaspoon granulated garlic and 1/4 teaspoon tarragon.
Brush lobster tails with butter mixture and bake in preheated oven for 15 minutes.

In a skillet cook bacon until crisp. Set aside on a paper towel lined plate.

Spread the outsides of brioche bread with the Miracle Whip mixture, coating the entire surface of each slice.

To assemble the sandwiches, place the cheese, bacon, and lobster on the inside of each bread slice. Using cheese on both sides will hold the sandwich together.

Preheat a griddle or skillet over medium heat. Grill sandwiches(Miracle Whip coated side out) until golden on both sides and the cheese is melted – about 4 to 5 minutes per side. Let the sandwiches cook until they move easily in the pan trying to move them to quickly will cause them to stick.