I’m really starting to get the hang of the Instant Pot. Instant Pot Potato Leek Soup is my latest “pot” creation. 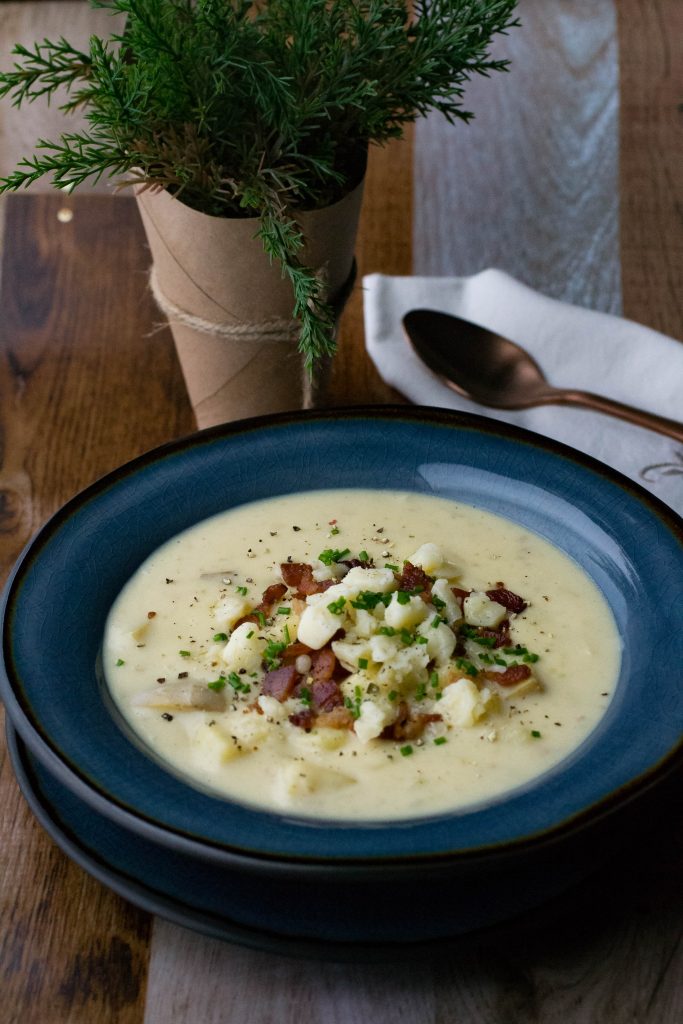 With the weather finally coming into fall……sorry for those who are anti-fall, but it’s my favorite season. Cooler temps, crisp air, beautiful foliage, and sweatshirts again!!

Soup is the ultimate fall food. Warm and filling comfort food at it’s best. Creamy, cheesy, full of potatoes, leeks, and with just a hint of bacon flavor… Instant Pot Potato Leek Soup is sure to be a new favorite!

When creating a post I like to try and give a background or some interesting facts about a least one of the ingredients. I’m sensing a pattern……recently every ingredient is “The World’s Healthiest Food”….antioxidants. 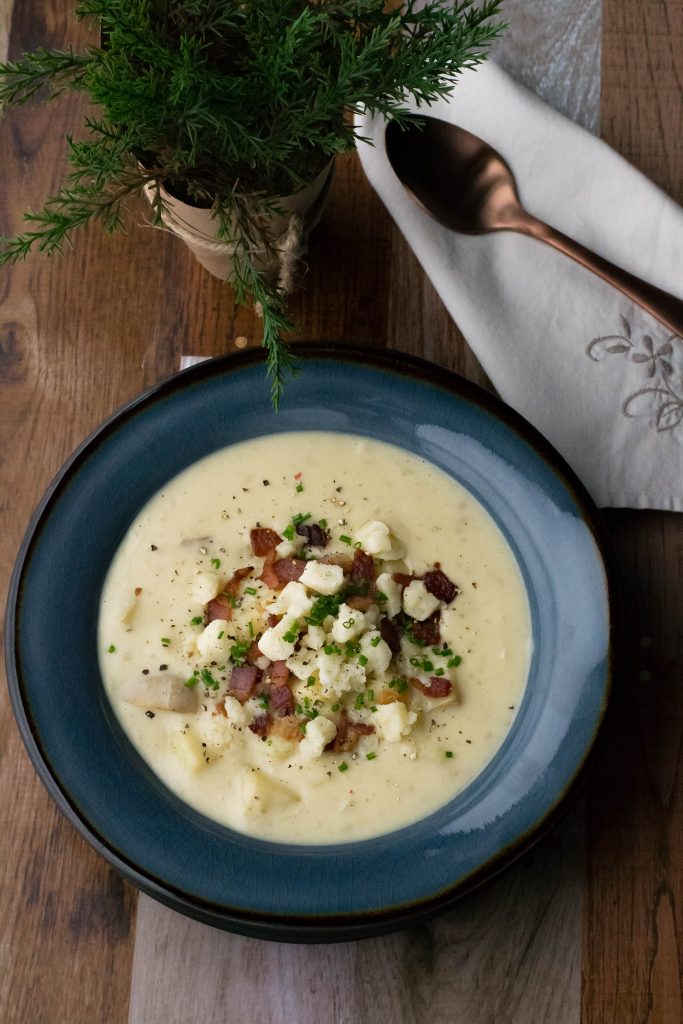 Leeks have a delicate flavor. Closely related to onions, shallots, and garlic. Leeks have their own distinctive flavor and flair.

Biblical accounts say that the taste was so wonderful that the Israelites thought of returning to Egypt(land of their captivity) just to taste them again. I’m not sure if this is fact, but they do have a taste that is worth at least a trip to your local grocery store.

Leeks are usually planted quite deep in trenches to deprive the stems of sunlight exposure, this keeps the tops white and tender. The more dirt you pile around as they grow the more useable white part you will have. 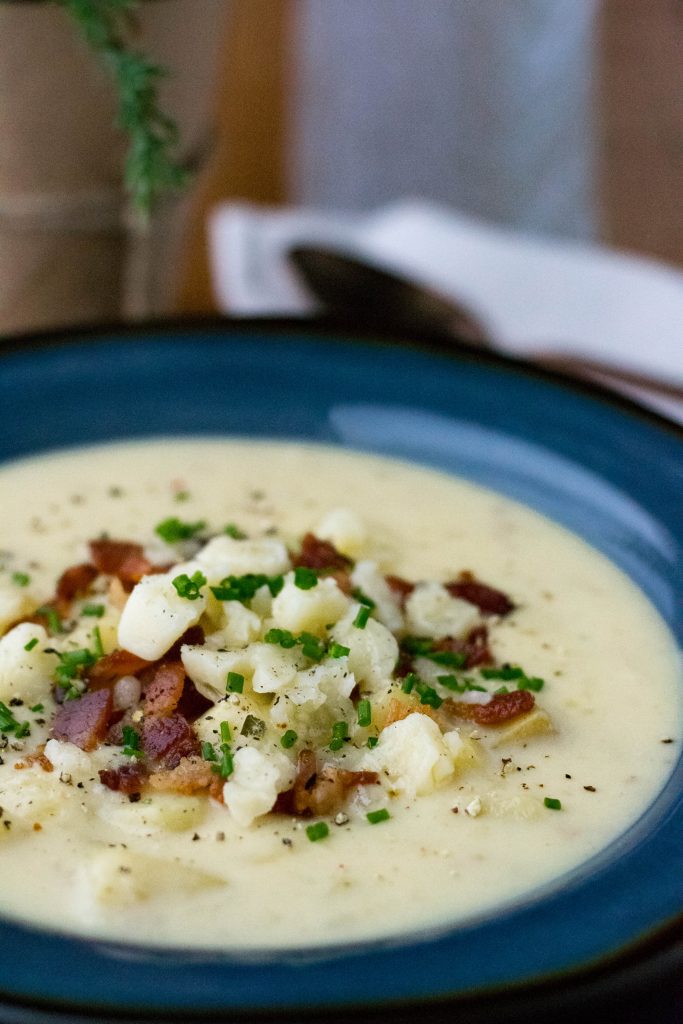 Whether raw in green salads, or sliced and sautéd, leeks add a special touch to any dish.

Leeks were perfect for this soup. Adding leeks is not a stroke of genius on my part, but leeks add that light onion, garlicy flavor without being overpowering.

Next to my Instant Pot…….. I LOVE my immersion blender. No bulky machine, no messy cleanup, just the perfect way to puree without a mess. 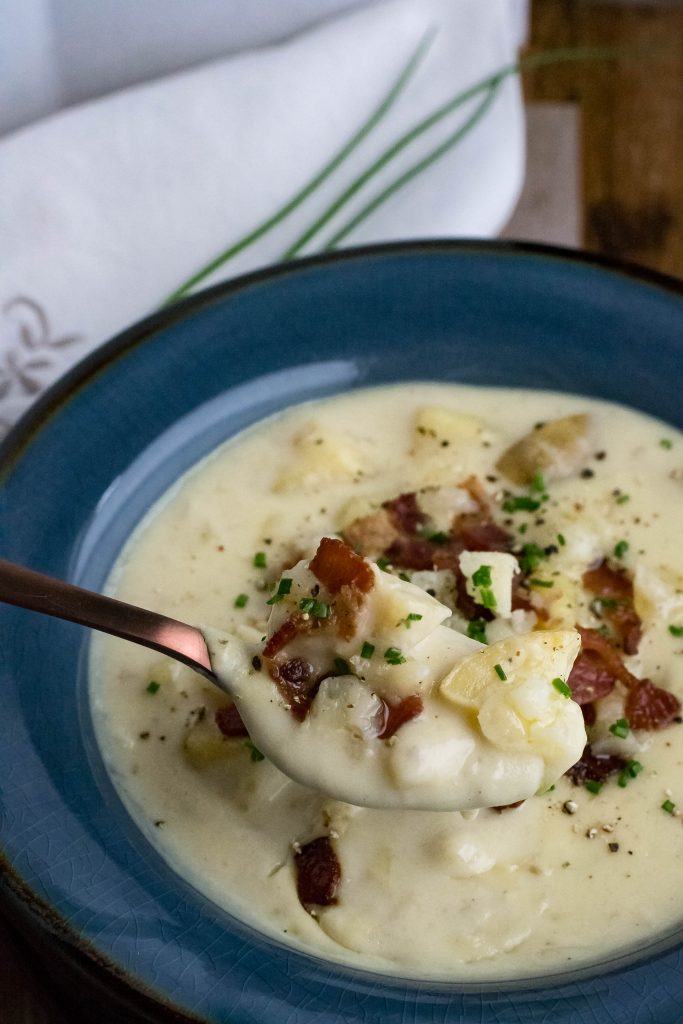 Potato soup in my world needs to have some chunks of potato, so I only pureed half. You can puree it all or you can leave it totally chunky. I went middle of the road. All food needs texture of some sort.

Now, potato soup is not potato soup without some cheese. It doesn’t need a ton, just enough to add to the creaminess. White cheddar cheese is a slight variance from the traditional yellow cheddar. 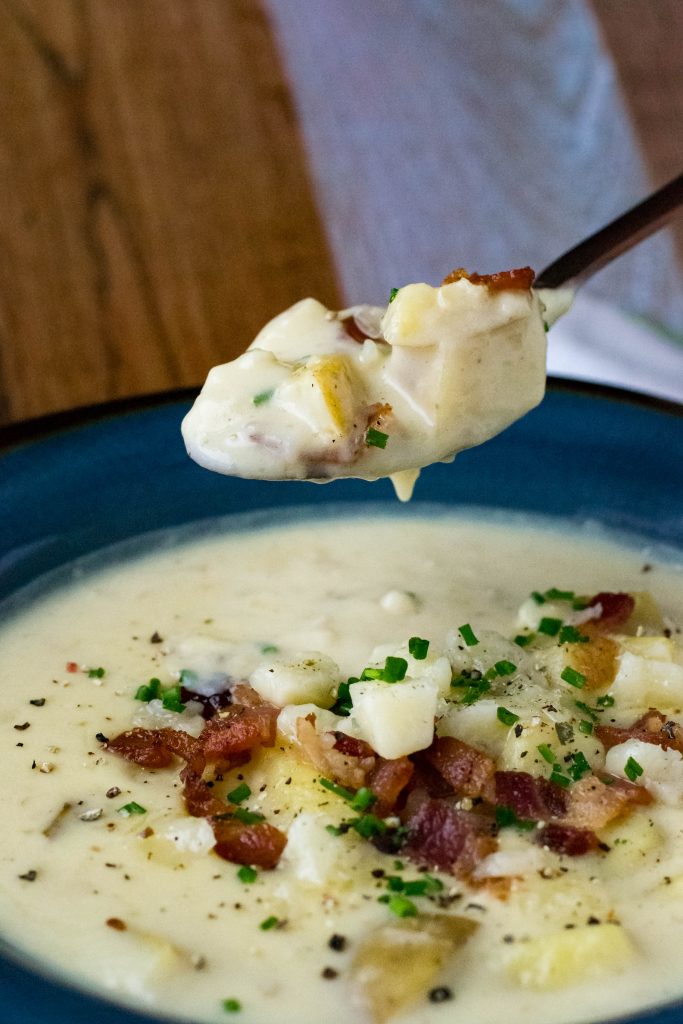 White and yellow cheddar is the same cheese, but yellow cheddar has an additive called annatto. Cheddar is light colored when produced. Annatto from the achiote tree (plant extract) gives that deep yellowish orange color that we as American’s expect from cheddar cheese. I liked the light color for this soup.

Instant Pots make quick work of any meal and soup is no exception. In about 30 minutes you can have a hearty warm soup ready. 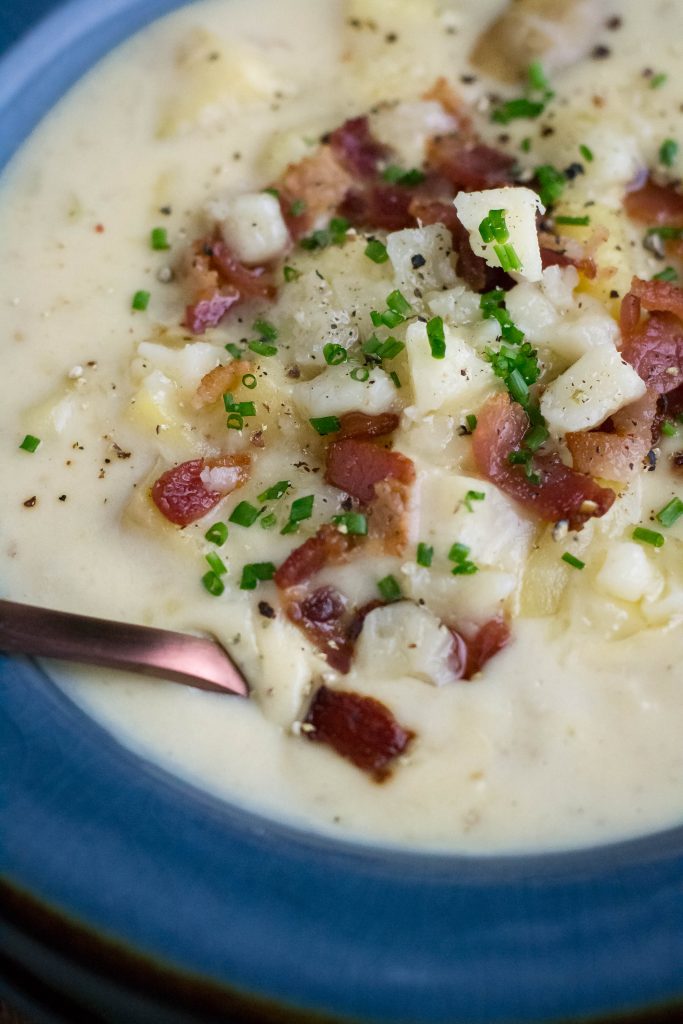 Ladle into bowl and top with bacon, extra cheese, and chives. Add a loaf of crusty bread or a side salad and you have a delicious dinner that looks and tastes like it took all day.

Bonus…you can make a pot of Instant Pot Potato Leek Soup on Sunday and have a nice dinner or lunch ready for your busy week ahead.

With Instant Pot on sear, cook diced bacon until just crispy. Remove to a paper towel to drain.
In the grease rendered from the bacon cook the leeks and garlic for 2 to 3 minutes, until translucent.
Add potatoes and chicken broth.
Place lid on Instant Pot and using high pressure cook for 6 minutes. Let natural release for 10 minutes, then quick release any remaining pressure.
Remove half of the potato mixture to a large bowl. Using an immersion blender*, puree the potato mixture remaining in the pot.
Return the mixture from the large bowl, add 1/2 cup half and half, and white cheddar cheese, stirring to mix and melt cheese.
Add the remaining 1/2 cup half and half and stir.

*If you do not have an immersion blender, place the half of the potato mixture into a stand blender and puree, returning the mixture and follow the directions as stated.

To serve place soup in bowl and garnish with bacon, extra cheese, and chives.