Fall is basically here? The last few days have been pretty warm here in the midwest, but you can feel the undertone of fall! Fall means apples, and apples mean apple crisp. Pecan Apple Crisp Bars are my version of apple crisp in an easy to eat bar. 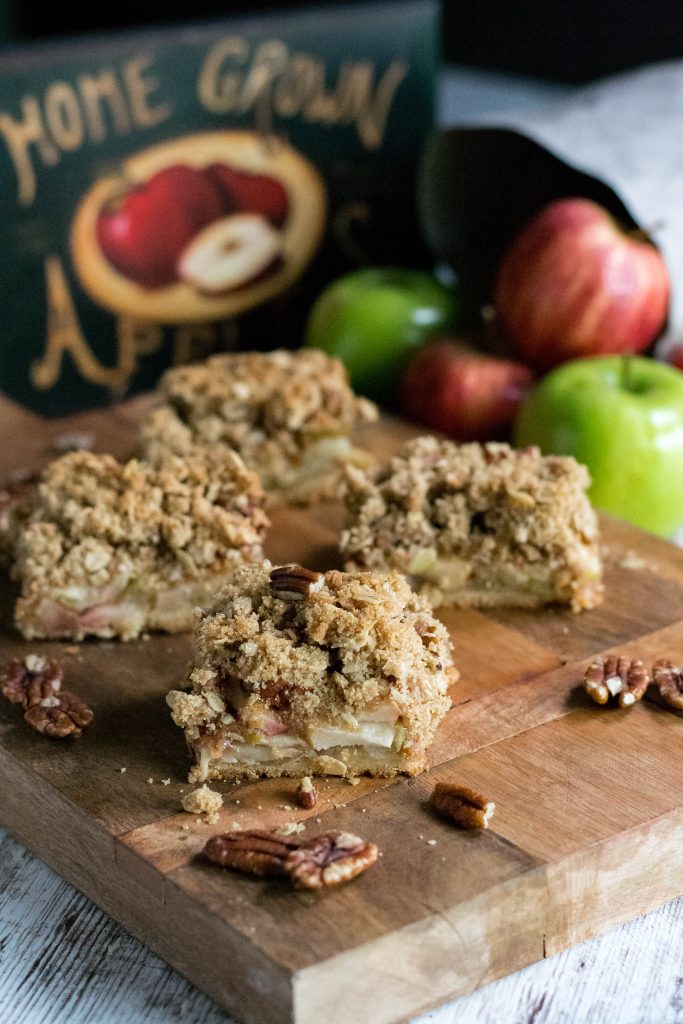 My favorite season is here. I love fall. The cooler air, the colorful changing of the leaves, and back to comfort food. Apple Orchards and picking apples are a popular weekend excursion here. I must admit I have not been to our local orchards……perhaps Tim and I need to make a visit soon.

Apple crisp is one of my top five favorite desserts. Warm and cinnamony. Topped with ice cream or whipped topping its the perfect end to a comfort food meal. It’s also a great snack, but it’s not a take-along snack…until now! 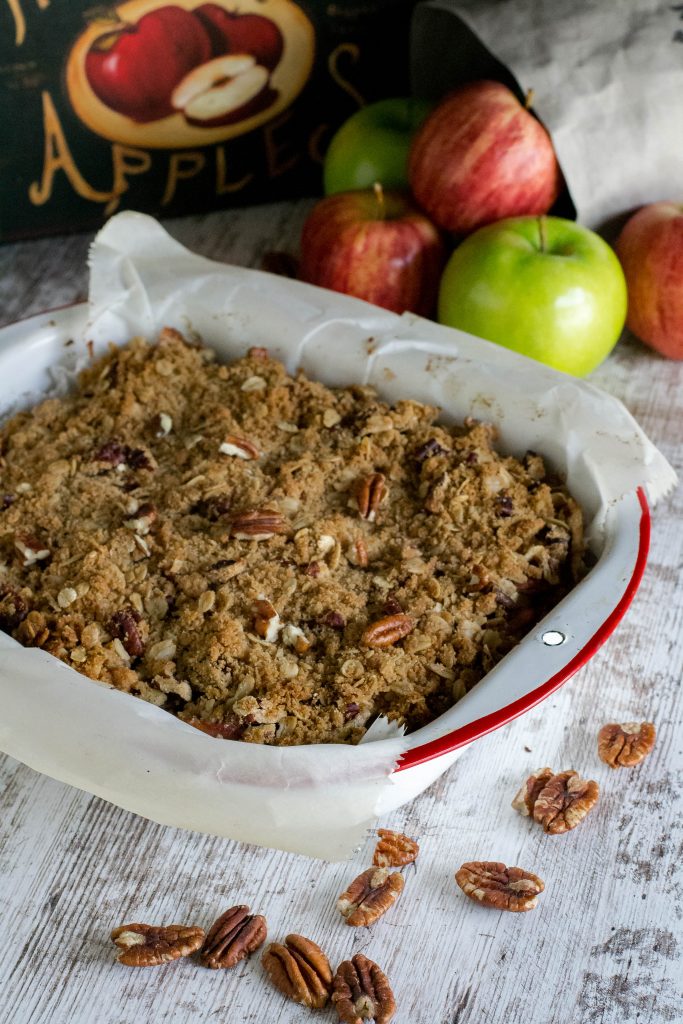 Pecan Apple Crisp Bars are easy to make and take. A crisp shortbread crust topped with apples, and a crumbly pecan oatmeal topping cut into squares. Perfect for a fall picnic or a sack lunch for work or school.

The shortbread crust is a sturdy base of the apple filling. I used two kinds of apples a Granny Smith and a Honeycrisp, but use any apple you like. I didn’t peel the apples as I don’t find it makes a difference. Plus it takes less time to prepare if you just core and slice them. 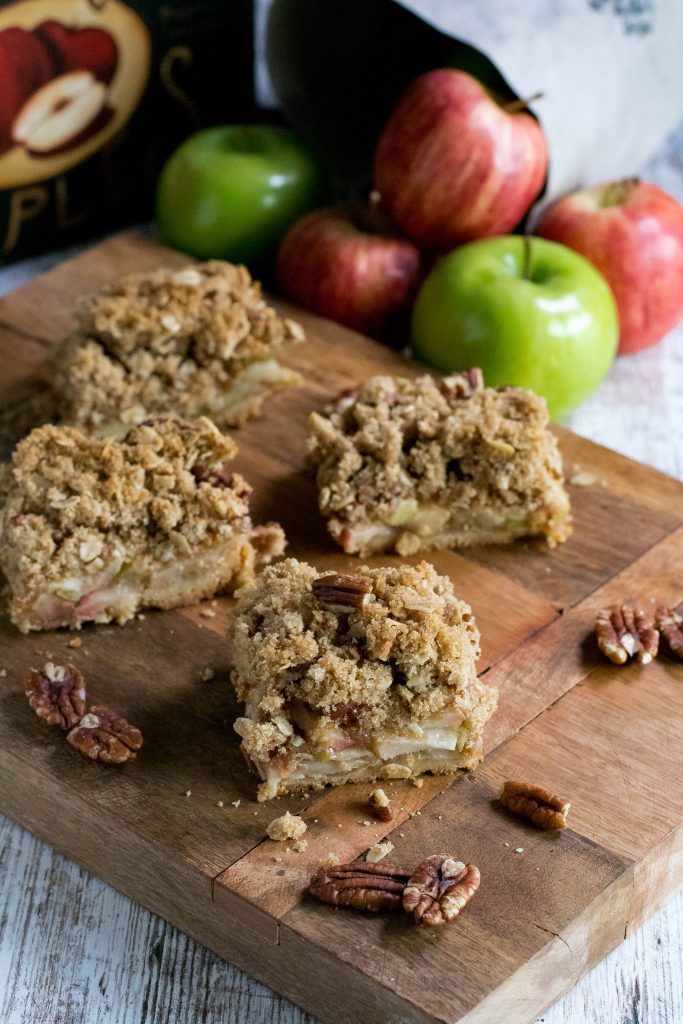 Pre-bake the crust and while it’s baking prepare the apple filling and crisp topping. For my money apple crisp topping needs oatmeal and pecans. Years ago, when microwaves were the Insta-Pot of the day, microwave cookbooks were everywhere. Appetizers, main dishes, and desserts were all microwavable. One of my cookbooks had a recipe for Apple Crisp that used pecans in the topping. I’ve never made it without since. 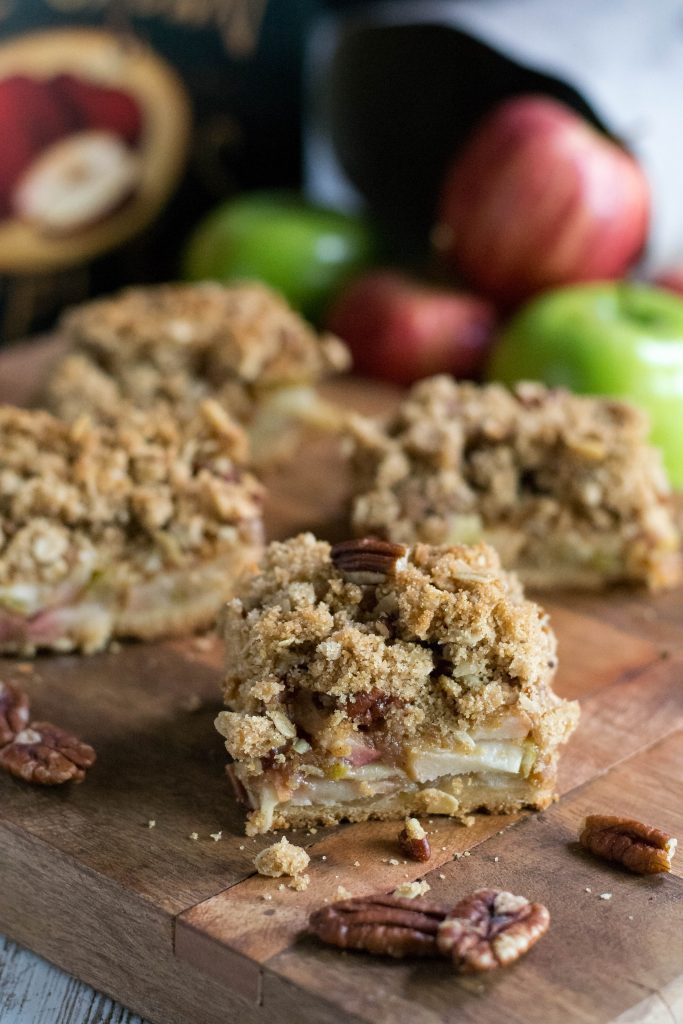 In a large mixing bowl, with a hand mixer, beat together the butter and sugar until light and fluffy, about 2-3 minutes. Add vanilla and mix. Add flour and mix until combined and the dough is crumbly.

Press dough evenly into the bottom of the prepared baking dish. Bake for 12-14 minutes, until mixture, is slightly puffed. Remove from oven and set aside.

In a medium bowl, mix together first five ingredients. With a pastry blender or your fingers, cut in butter until mixture is crumbly. Stir in pecans. Sprinkle the topping over apples in an even layer.

Bake uncovered at 350º F for 45 minutes, or until topping is golden and apple mixture is bubbly. Top loosely with foil if the topping gets too brown during baking.

Let cool, lift the bars from the baking dish using the extra parchment paper at the ends as handles, and cut into bars.

Store bars in an airtight container in the refrigerator or at room temperature for up to 5 days.