Can you stand on more after Thanksgiving recipe?
Turkey and Cranberry Herb Dumplings is a great way yo use up all the remaining leftovers from Thanksgiving. 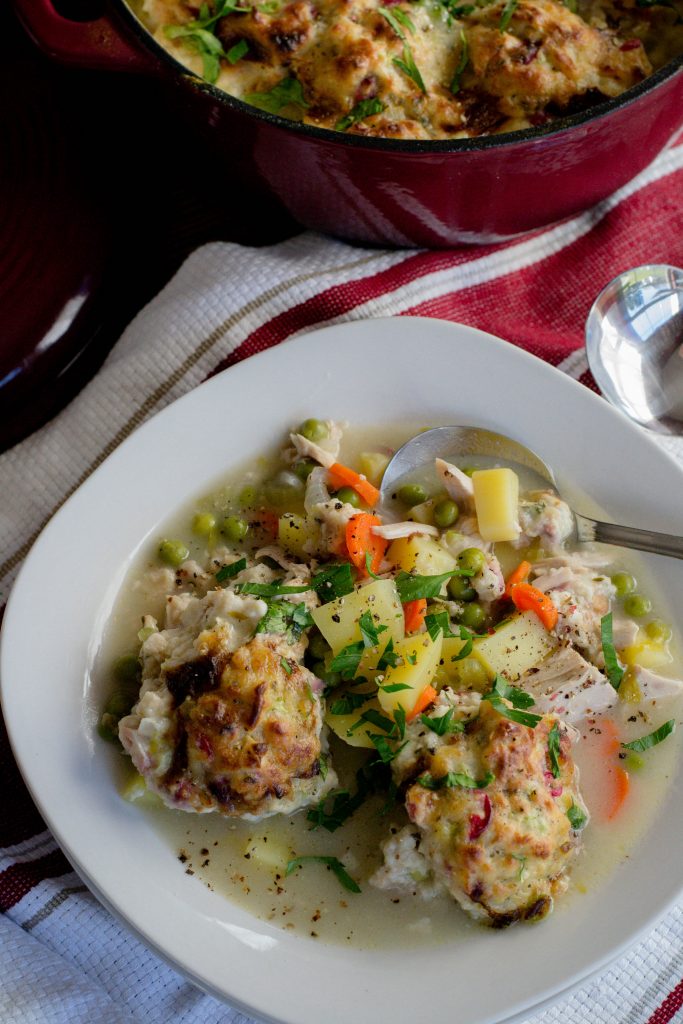 You know how you still have leftovers and you just can’t bear to throw them out? After all the work that went into the preparation of the meal, it seems shame to throw anything away.

Turkey and Cranberry Herb Dumplings can help you waste not and want a lot…….this is delicious!!!

Working in a school as I do you are exposed to many a germ, most years I will get a cold or a 24 hour bug. This year I received a full blown case of the flu…that, I was run over by a bus, fever, can’t get warm enough, I just want to crawl into bed and stay forever kind of flu. I had the never ending fever….ugh! 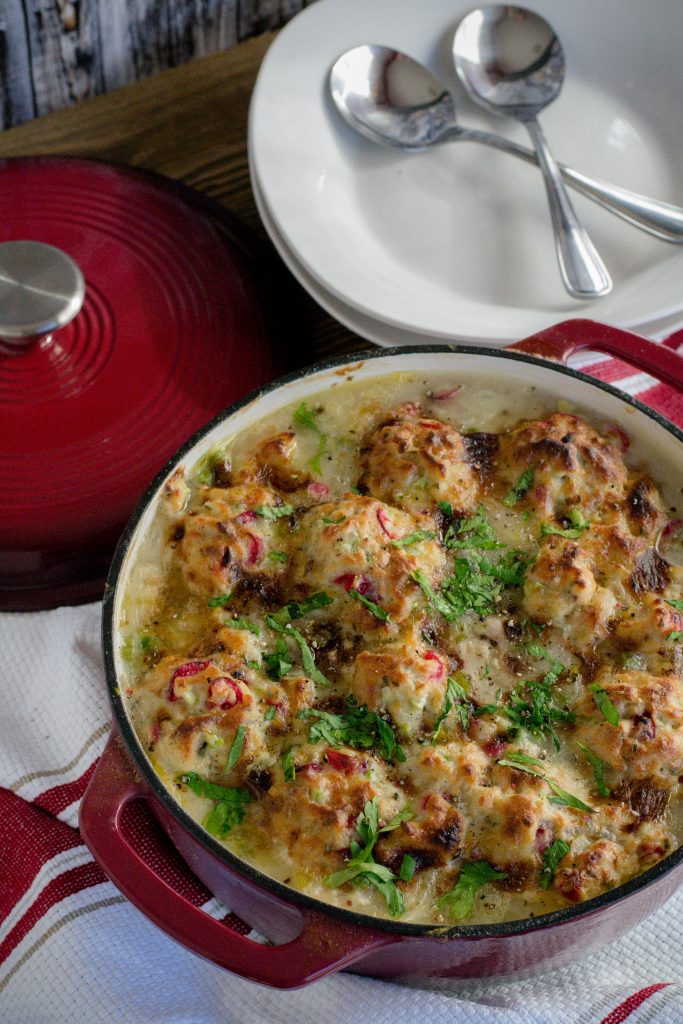 I missed Thanksgiving with my family….double ugh!! As a blogger I live in food world forward….meaning that my recipes need to be ready and posted well before things like Holidays. After all what good is a great recipe for BBQ Ribs on July 10th?

Thank goodness I already had a turkey and the fixings cooked before the dreaded flu hit. I had one day where I thought I was on the mend, made a few recipes and by the end of the day was back in bed with the return of the fever. 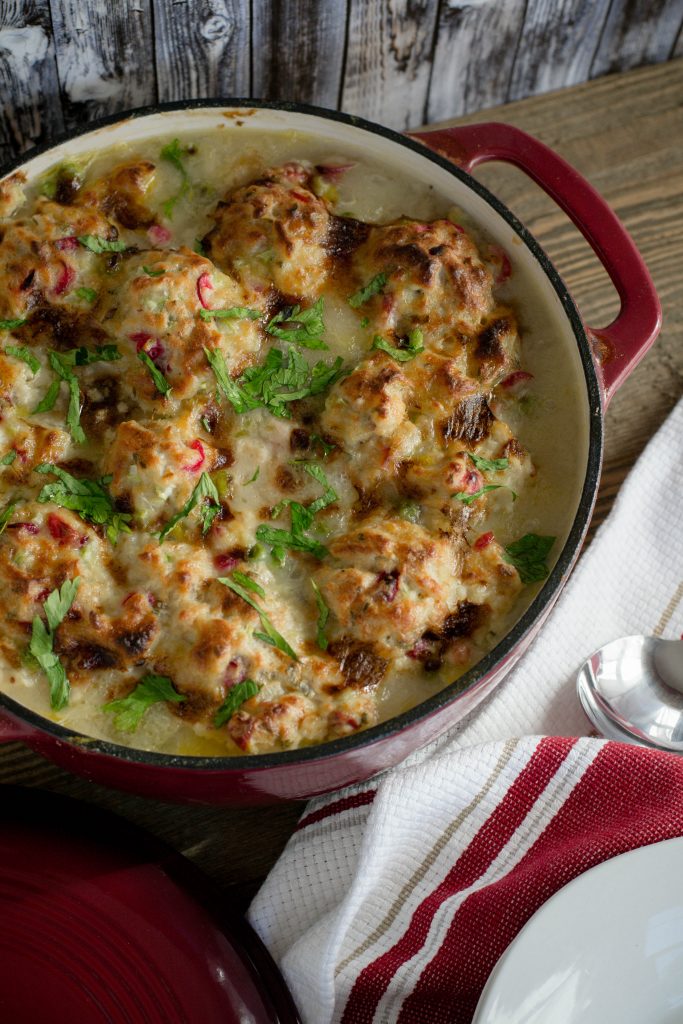 Using the turkey carcass, I made my own turkey broth by using the Martha Stewart method. Click here if you want to make your own.  It is perfectly acceptable to use the box variety.

For a first attempt at dumplings, I think I did pretty well. I used leftover stuffing, onion celery, fresh herbs and fresh cranberries. In the recipe I use a flour called Wondra. This stuff is gold….. it’s the unsung hero of the kitchen. It dissolves more quickly than all purpose flour, it mixes very easily, and makes smooth, lump-free sauces and creamy gravies every time. You can find it in the grocery store in the flour section. After mixing I let the mixture set, allowing the cream to absorb into the dumplings.

The soup part is pretty basic, onion, celery, potatoes, herbs, turkey and frozen green peas. A roux is made, the stock added, and then the veggies. Add the turkey and peas at the last minute so the turkey doesn’t cook into mush and the peas retain they pretty green color. 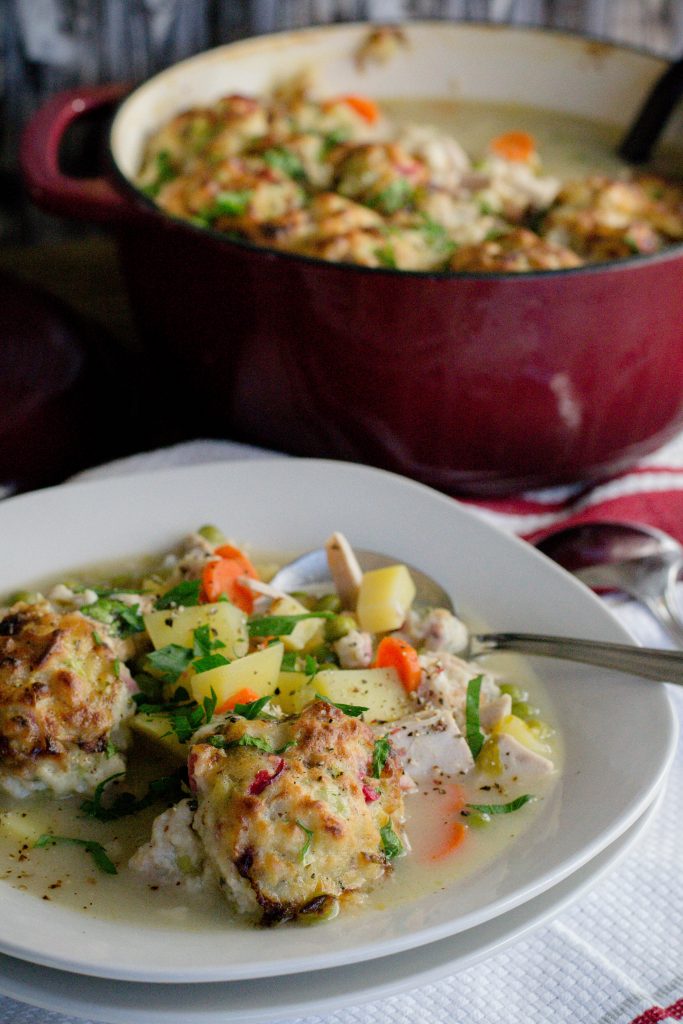 Dropping the dumpling mixture into the simmering soup I was afraid they would sink never to be found again, but they floated….yeah!! Lid back on I waited for the 8-10 minutes….it was hard not to peek! I read somewhere you shouldn’t lift the lid…so I didn’t.

When I did lift the lid….perfection! My only problem was that for pictures they were a bit white. My broiler to the rescue. I put the entire pot under the broiler for about 7 minutes and they browned up perfectly. If you do not want to do this step it will not affect the taste what so ever, but blogger world and photography….so broiler for me. 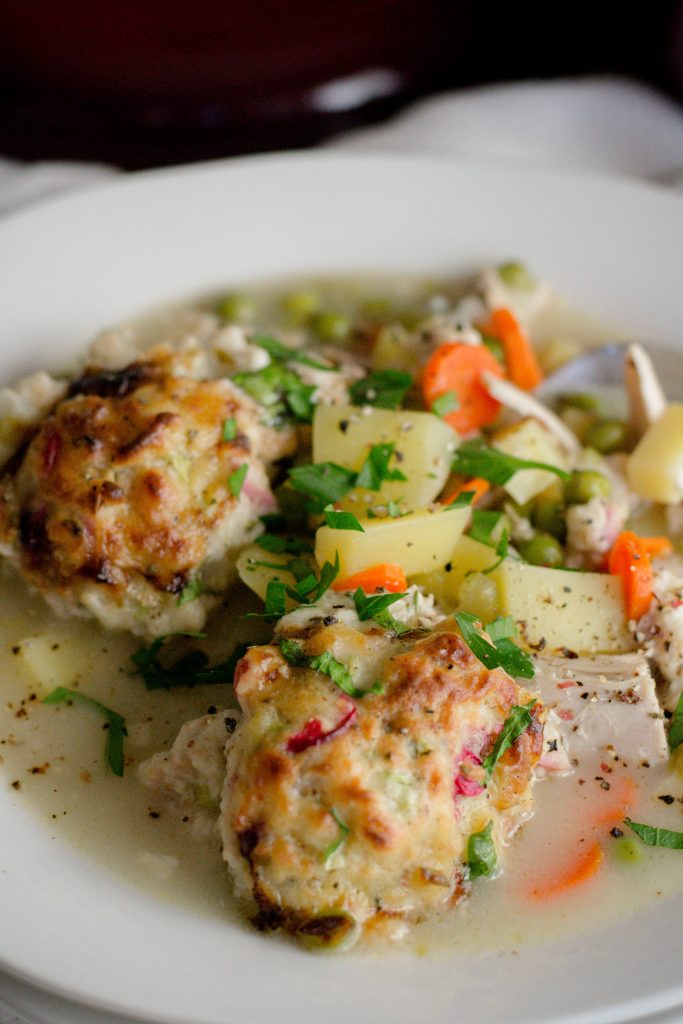 The result was a creamy almost stew like soup, topped with dressing dumplings that extended the taste of Thanksgiving for one more meal and used up those reaming leftover.

Now, onto Christmas and cookies….stay tuned!!!!