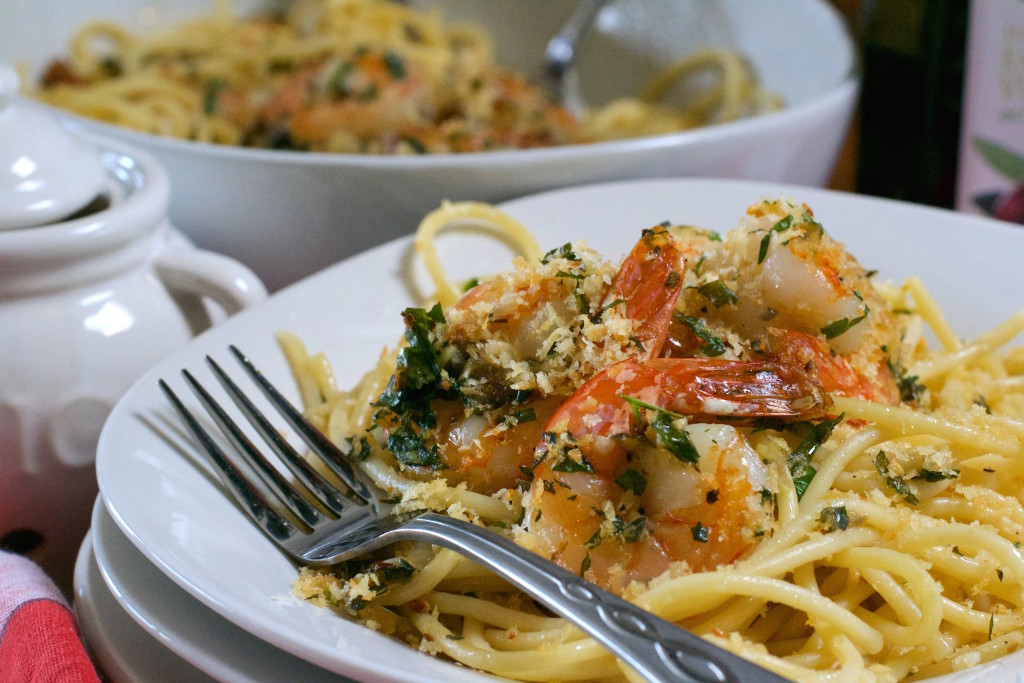 I teased this recipe Sunday on Instagram when I made it…….for all of you who ask….and those of you who begged ( you know who you are) for the recipe ……..ta da!!!!!!! 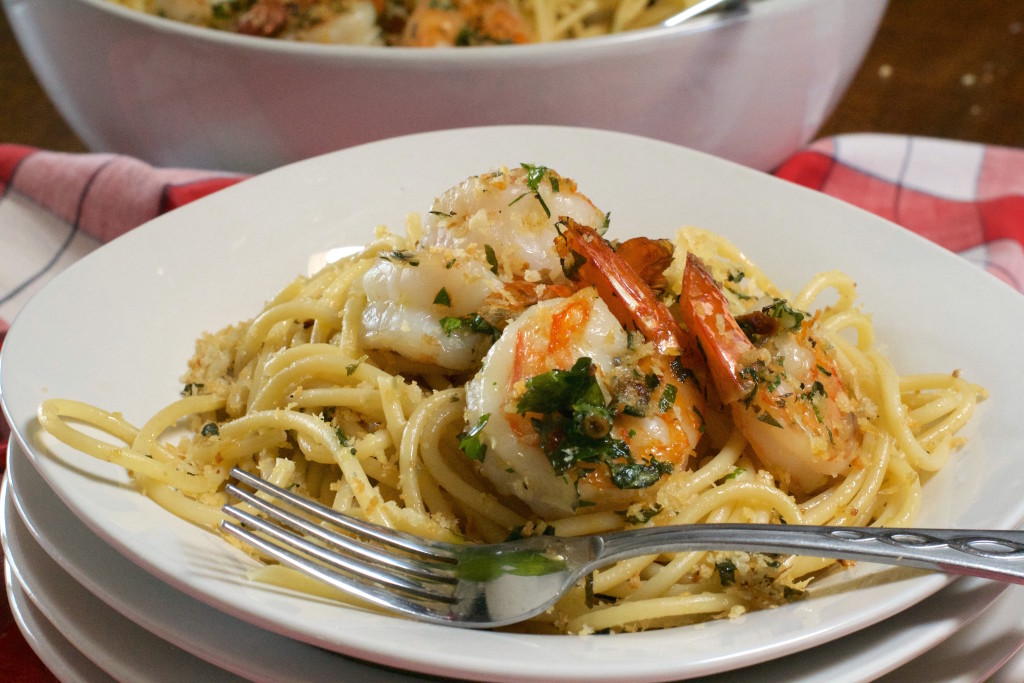 Tim has been requesting a shrimp dish. So, a trip to …you guessed it, the grocery store. One thing with living in a fairly small town is that fresh fish is not alway readily available. Frozen????

Fresh shrimp ( if available) always looks more enticing — and, well, fresher — but…….because nearly all the commercial shrimp is individually quick-frozen shortly after being caught, the “fresh” shrimp at the grocery store is actually just thawed frozen shrimp. Non-frozen shrimp is more convenient and usually more expensive than frozen. But, because there’s no telling when they were thawed, they can also be less fresh. Oh, the irony.

So…… I bought frozen, and I bought the big daddy’s. I wanted show stoppers and that’s what I got. They were already deveined ……..if you buy them and they are not deveined …….devein them, we all know what that vein is….yuck!

I did leave the tails on for photographic reasons….i.e. they look prettier. I also roasted them. I have never done this before either………holy cow!!!!! I swear roasting brings out the flavor in everything!!! 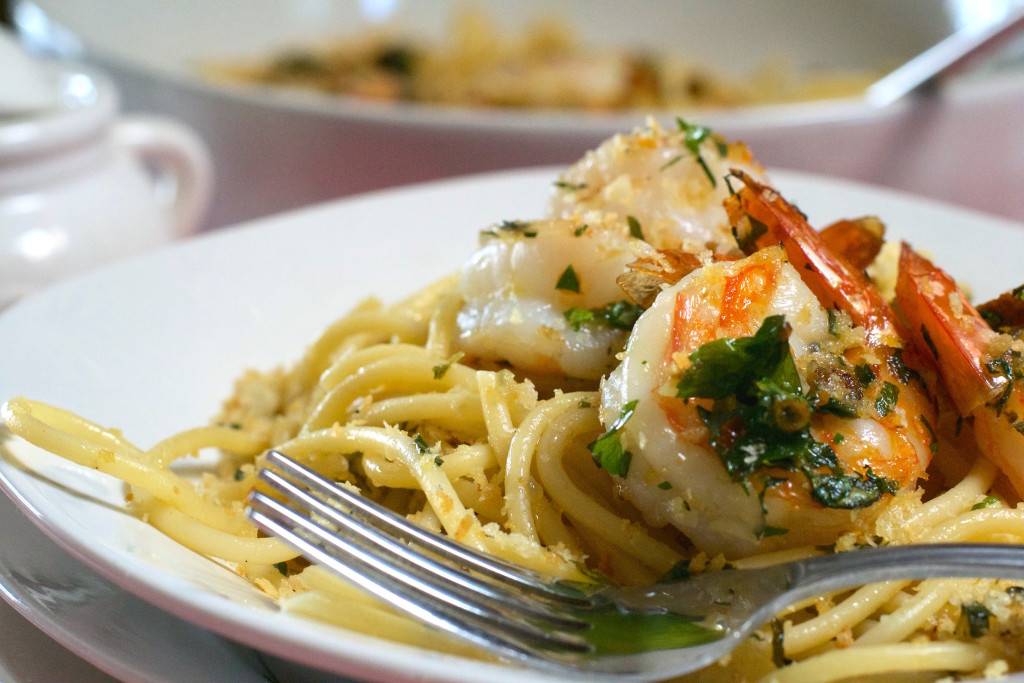 As I said in a recent post, I did not have a garden this year, but I always have herbs. I raided the herb garden……I got some of almost all of it.

I also found a new pasta called bucatini, its thick spaghetti with a hollow center…..cool huh! If you can’t find it, spaghetti or angel hair will work just a well.

The recipe was easy to make, although it did require quite a bit of chopping. Mostly of the afore mentioned herbs.

Now, about those crumbs….first, if you have never used panko crumbs, do yourself a favor and try them.

Panko is a Japanese-style breadcrumb traditionally used as a coating for deep-fried foods. The biggest difference between panko and standard breadcrumbs is that panko is made from bread without crusts, says Pam Becker, media representative for Progresso, who makes both types. 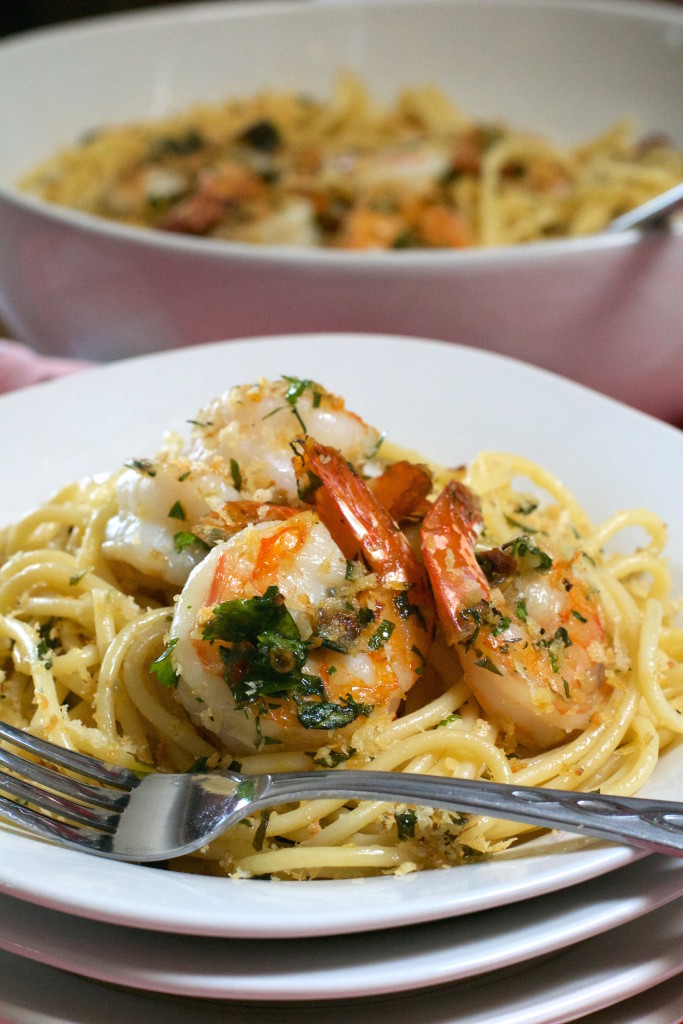 Panko’s crustless bread is coarsely ground into airy, large flakes that give fried foods a light, crunchy coating. The flakes tend to stay crispier longer than standard breadcrumbs because they don’t absorb as much grease. I like the less grease part.

I loaded them up with herbs, garlic, and a touch of red pepper flakes…. coated them with butter and toasted them.

Once the shrimp was roasted……succulent, pink and covered in herbs, and placed on top of al dente pasta with just a touch of olive oil and lemon juice……I sprinkled those crispy crumbs all over………it was a taste that each bite was more delicious than the bite before.

Since there are plenty of crumbs, be liberal. I really can’t describe what a winning combination this is, so go ahead and make yourself a big bowl of Herbed Shrimp and Pasta with Crispy Crumbs….you’ll want to lick the plate clean!!!! 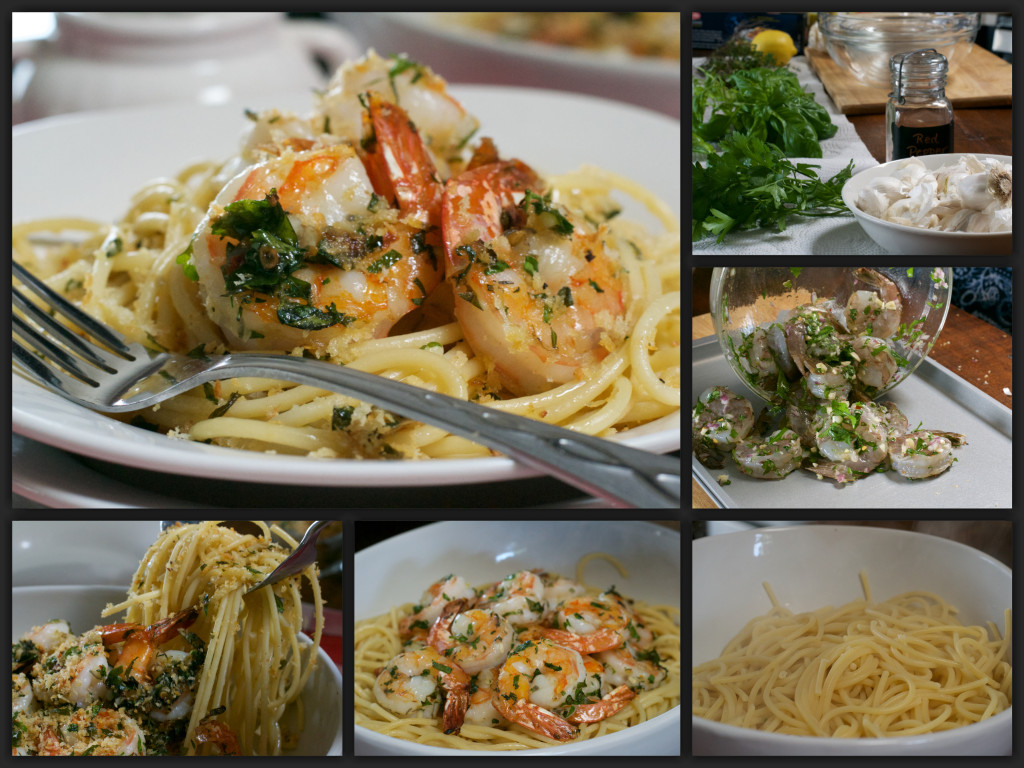