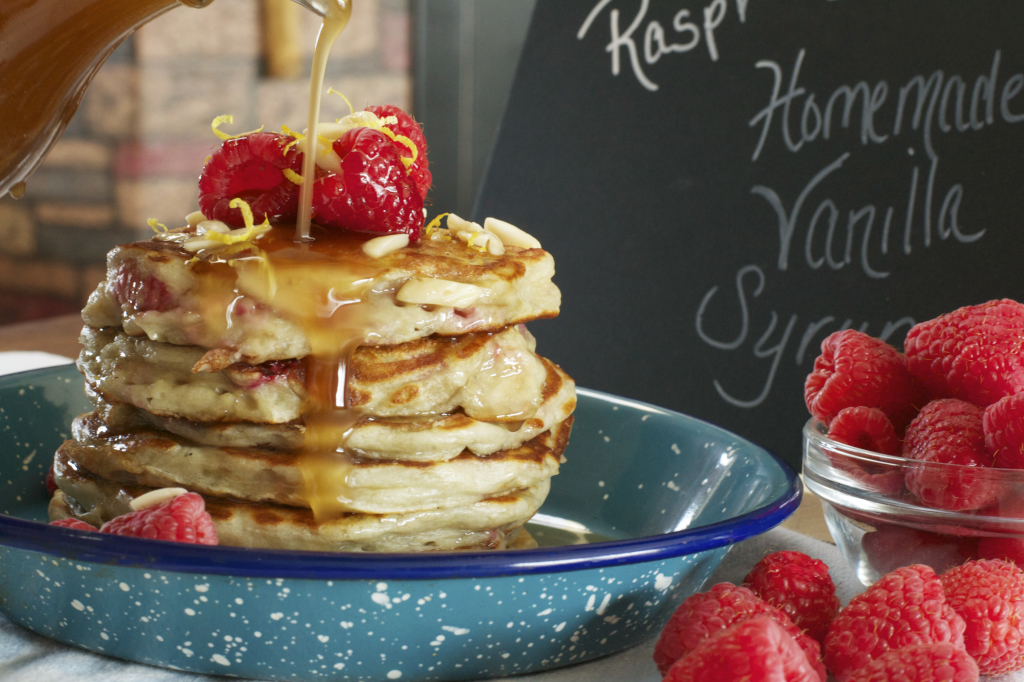 Wow……that is a mouth full……a mouth full of yummy flavor. These pancakes rocked, and the syrup was sticky sweet vanilla goodness.

Now, having said that, I am not huge fan of pancakes. I mentioned this in my post for Cinnamon Pancakes with Brown Sugar Bacon Pancakes would not be my choice…….I’m more of a French toast girl…………but you know me, anything French…….but I saw a picture of some blueberry pancakes and for some reason I thought they looked delicious. Oh, and I am not a big fan of blueberries either…….wonder why they looked so good?

Maybe they got me thinking about breakfast…..after all it was Sunday morning. Tim was at work and I wanted to make him breakfast. Now, he likes pancakes, and since he was working on a Sunday, he needed a special treat!

So, me not being a fan of either pancakes or blueberries, I needed to switch it all up…….if I do have pancakes I like buttermilk pancakes the best, but I didn’t have buttermilk. I know you can do the vinegar in milk trick but to me it just isn’t the same……. but I did have Greek yogurt…..would it work?…..darn tooting it worked……like a charm. 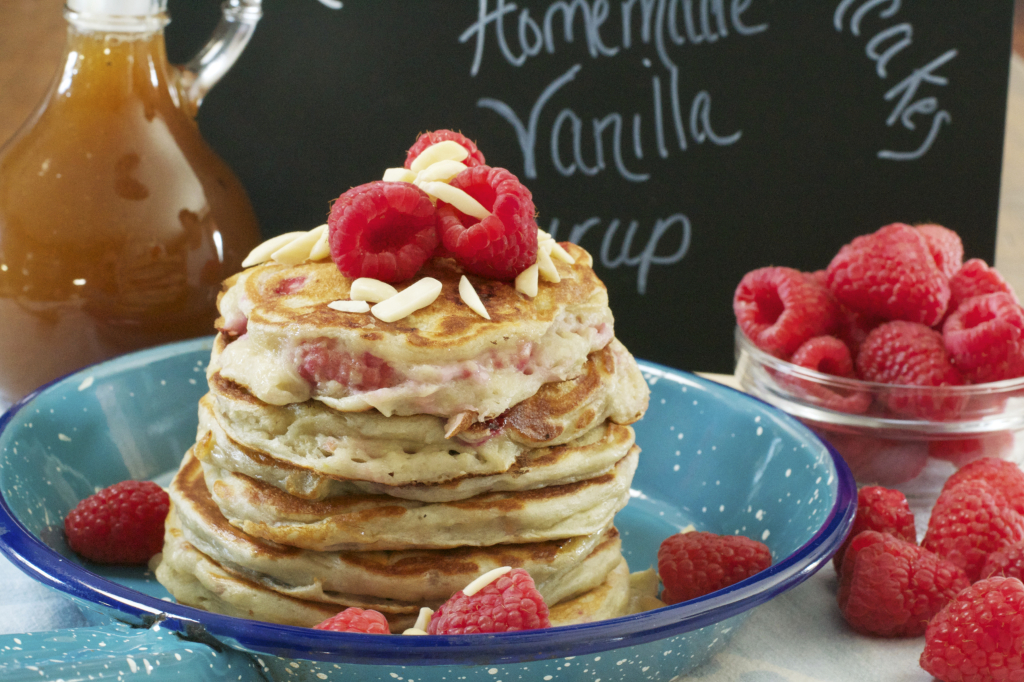 Raspberries were on sale when I got groceries, so of course I bought them and they replaced the blueberries. In my opinion raspberries need almonds, so I used almond flour with regular flour and a bit of almond extract. Once I mixed the wet and dry pancake ingredients, I folded in some slivered almonds and raspberries. I cooked them on a flat griddle sprayed with non stick spray. They puffed up beautifully.

I really couldn’t see putting maple syrup on these. I found tons of ideas for syrups, but nothing sounded quite like what I wanted, until I started to see vanilla syrup recipes……now that sounded like just the ticket. Two kinds of sugar, a bit of cornstarch to thicken, some water, and for that special vanilla taste, a vanilla bean. I scraped out the inside of the bean and put it in the syrup and put the bean pod in for a little extra vanilla taste……it turned out perfect. I had never had flavored syrup before………but this was totally awesome. 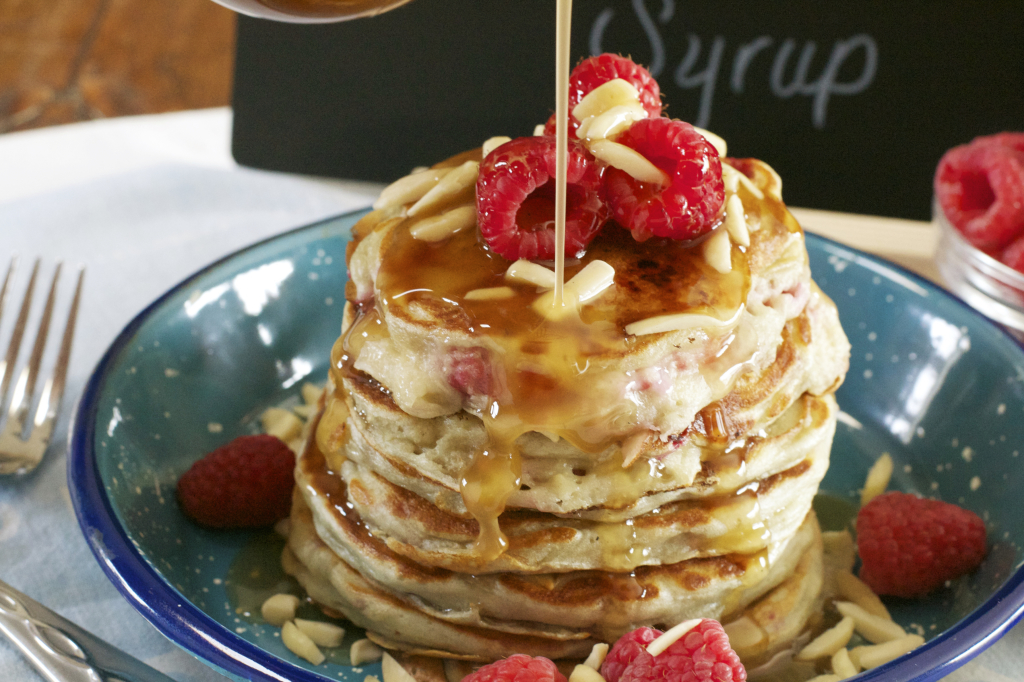 When Tim got home …….after he took these fabulous pictures for you to enjoy…….we had what were the best pancakes I have ever had……..fluffy, almondy, raspberry goodness with that homemade syrup ………..there is some of the syrup left, maybe I will make pancakes this coming Sunday!!!!!! 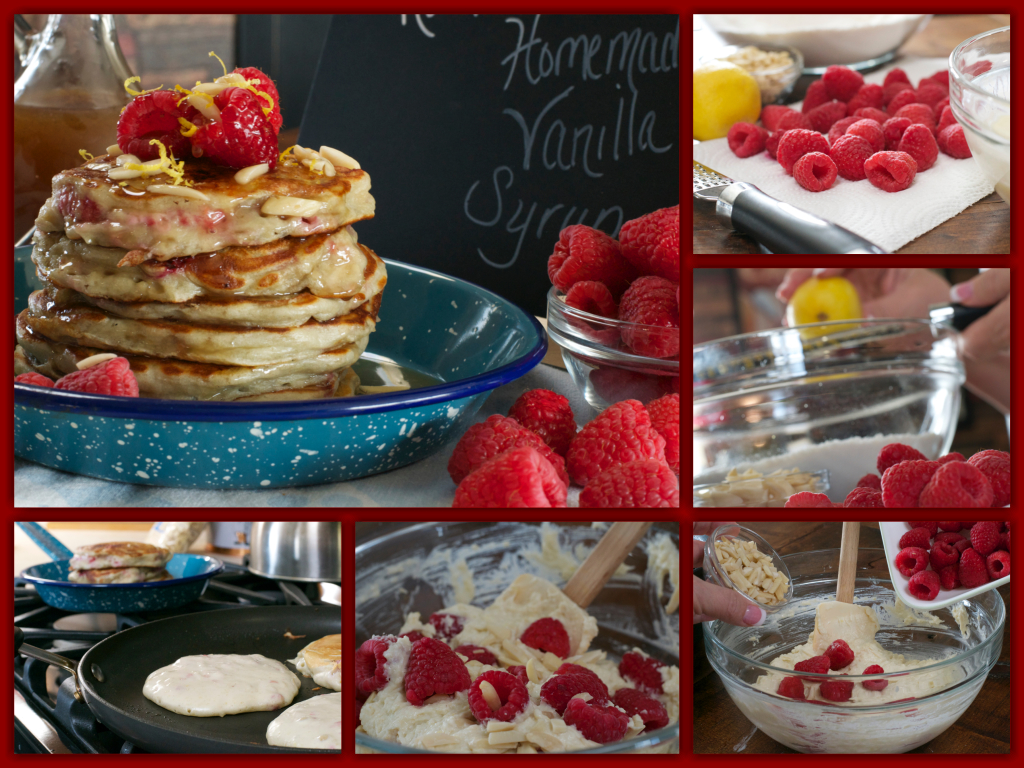