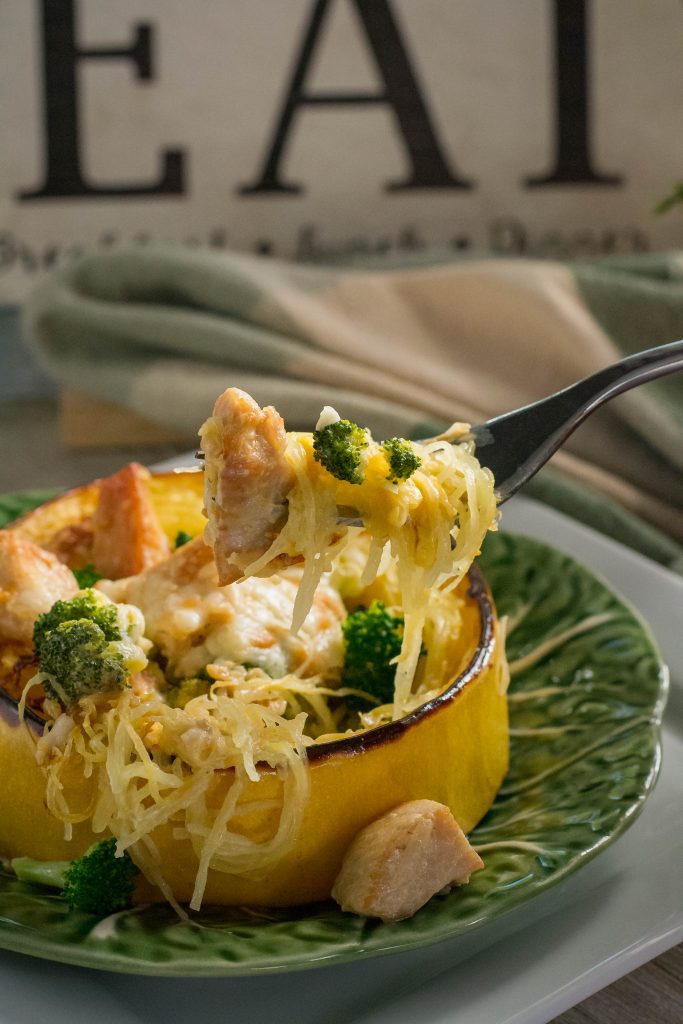 I watch a lot of food TV, search recipe sites, and well….there’s Pinterest. Spaghetti squash has a cult following with those who want to cut carbs. For me, I love the taste, and the fact that it cuts carbs is a bonus.

Roasting a spaghetti squash brings out a wonderful nutty flavor that lends itself to any dish that uses “spaghetti.” Does it taste like spaghetti? No, it tastes like squash, but squash picks up the flavors that you pair with it. 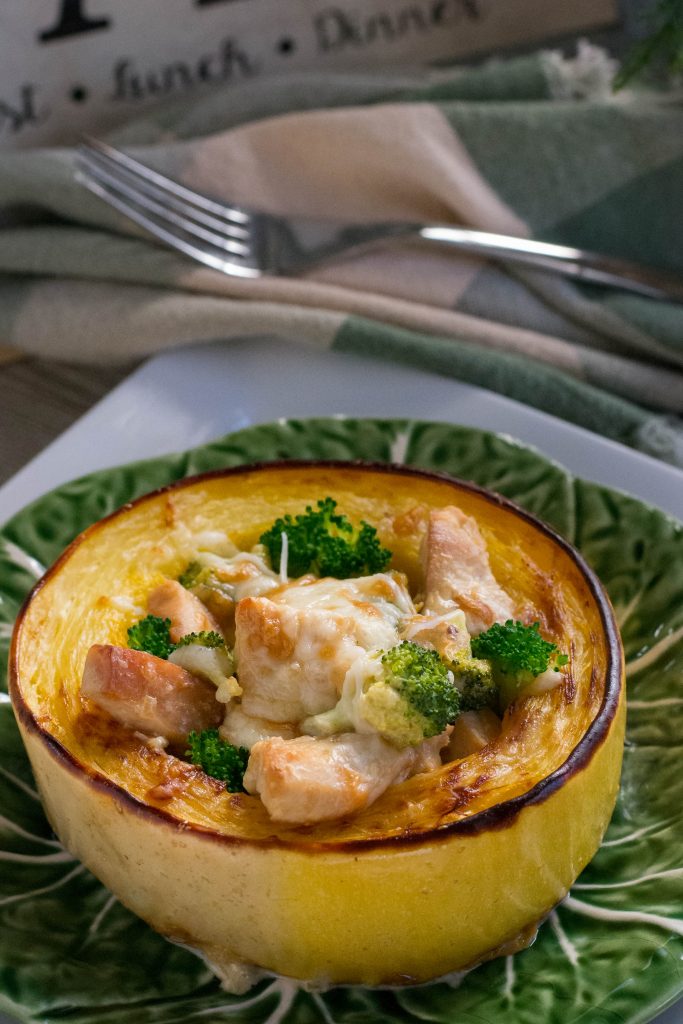 On either a video or tv show I saw a woman cut the spaghetti squash into rings and roast it……lightbulb! ( I did not save a link, so if this is your idea, please let me know, and I will link to your site)  Her premise was that spaghetti squash grows in a circle inside the skin, so you get longer strands if you cut it into circles, challenge accepted.

Admittedly cutting spaghetti squash into circles is a bit of a difficult task, but if you are careful and have an excellent knife….no problem. 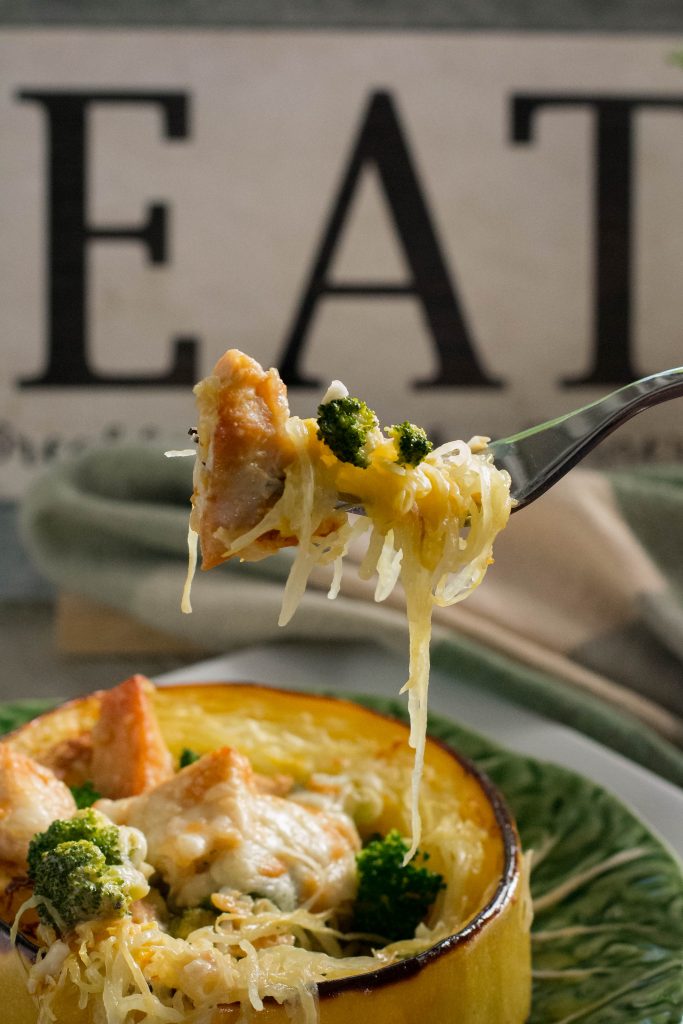 Cut off both ends of the squash, then laying lengthwise cut the squash in half and then in half again, to form four rings. Remove the seeds and slather with a neutral oil, salt, and pepper. Into a 400 degree oven and roast until tender. I turned mine over halfway through the cooking time, so all of the golden goodness was on both sides. 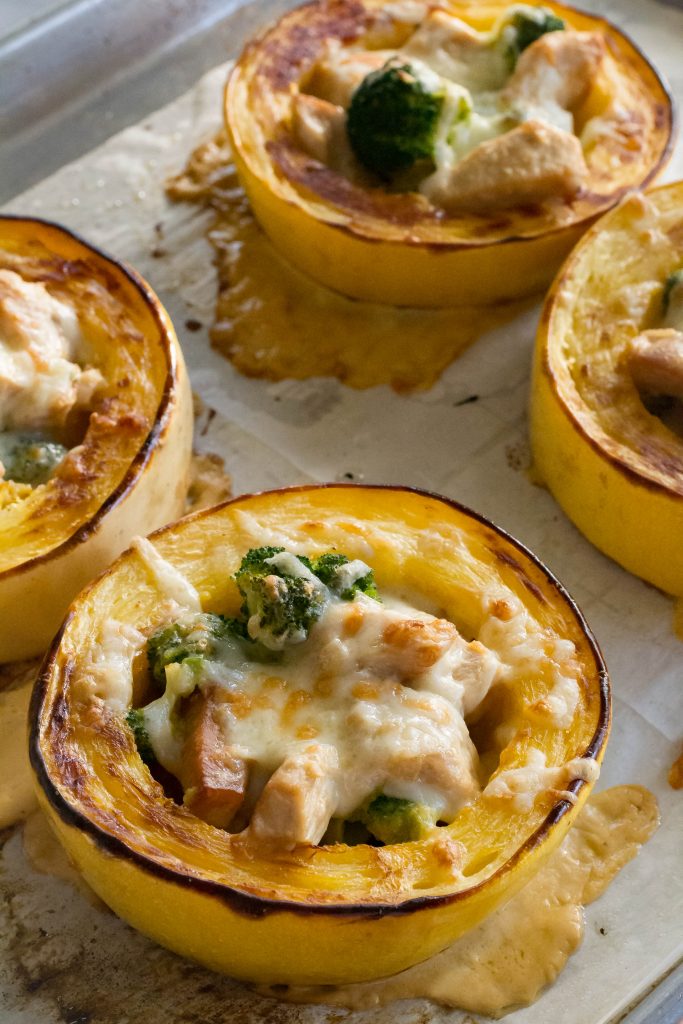 Fall is all about cozy, warm, comfort food and nothing says comfort better than a chicken casserole. Add some broccoli for color and cheese for gooiness, and you have comfort at its finest.

Fill the squash circles with the chicken broccoli mixture and top with extra cheese. Broil until the cheese is golden and melted. 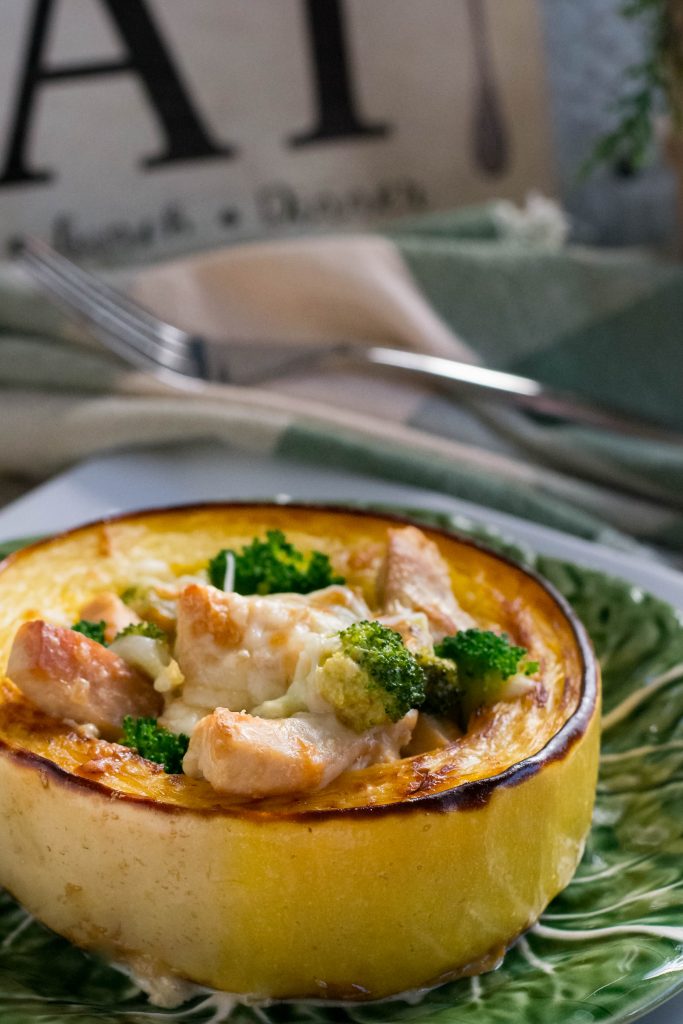 Drizzle the rings with 2 teaspoons of the oil and season with kosher salt and black pepper.

Place the rings on the baking sheet lined with parchment paper or foil and roast in the oven for approximately 40 minutes or tender. Turing over once during baking.

Remove from the oven and let set aside while making the filling.

In a large non-stick skillet heat oil over medium-high heat.

Add in the chicken, season with salt and pepper and sauté until cooked through.

Remove the chicken from the skillet to a bowl and set aside.

Reduce to medium and add remaining two teaspoons of oil to the skillet.

Add in the shallot, garlic, and red pepper flakes.

Sauté for about a minute.

Add the broccoli florets and season with salt and pepper. Place a couple tablespoons of water in a skillet with broccoli.

Cover and let the broccoli steam for about 2 minutes.

Return the chicken along with any juices back into the skillet.

Add in half 1/4 cup of each of the shredded cheese and stir until melted.

Remove from the heat and stir in the Greek yogurt until combined.

Scoop the filling into the spaghetti squash rings dividing equally.

Top filled rings with the remaining cheese and broil until cheese is melted and beginning to brown.