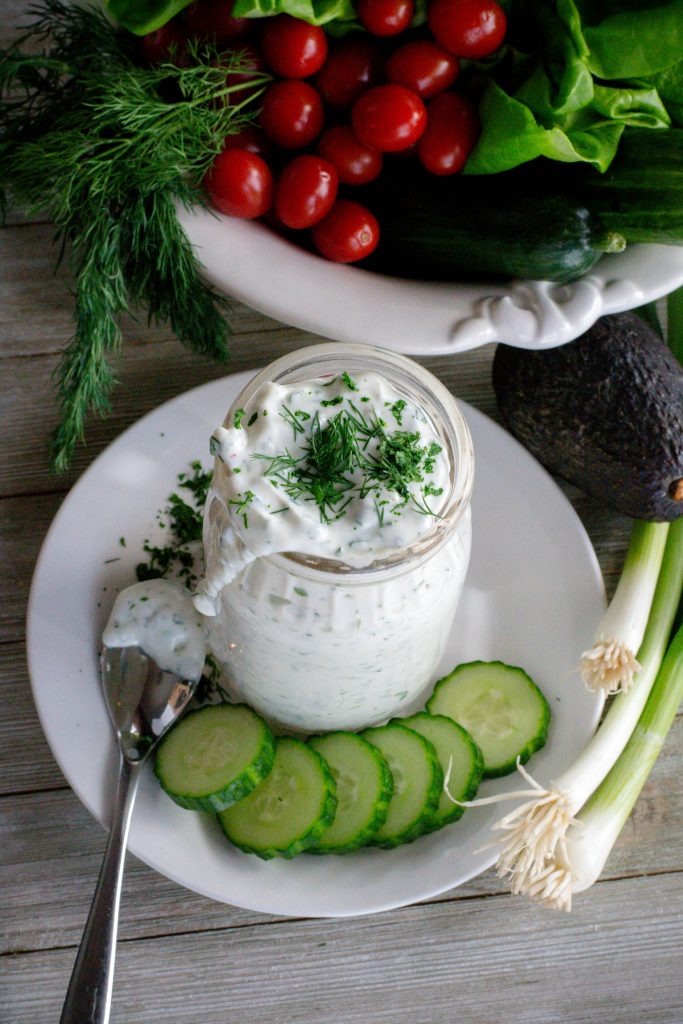 Whats more popular than Ranch dressing? I think nothing! Ranch dressing overtook Italian as the best selling dressing in 1992 and it never looked back.

Ranch is a dressing for salads, a dip for fresh and fried foods. It’s used on everything from pizza to burgers.

According to Wikipedia;
In the early 1950s, Steve Henson developedwhat is now known as ranch dressing while working as a plumbing contractor for three years in the remote Alaskan bush. In 1954, he and his wife Gayle opened Hidden Valley Ranch, a dude ranch at the former Sweetwater Ranch on San Marcos Pass in Santa Barbara County, California, where they served it to customers. 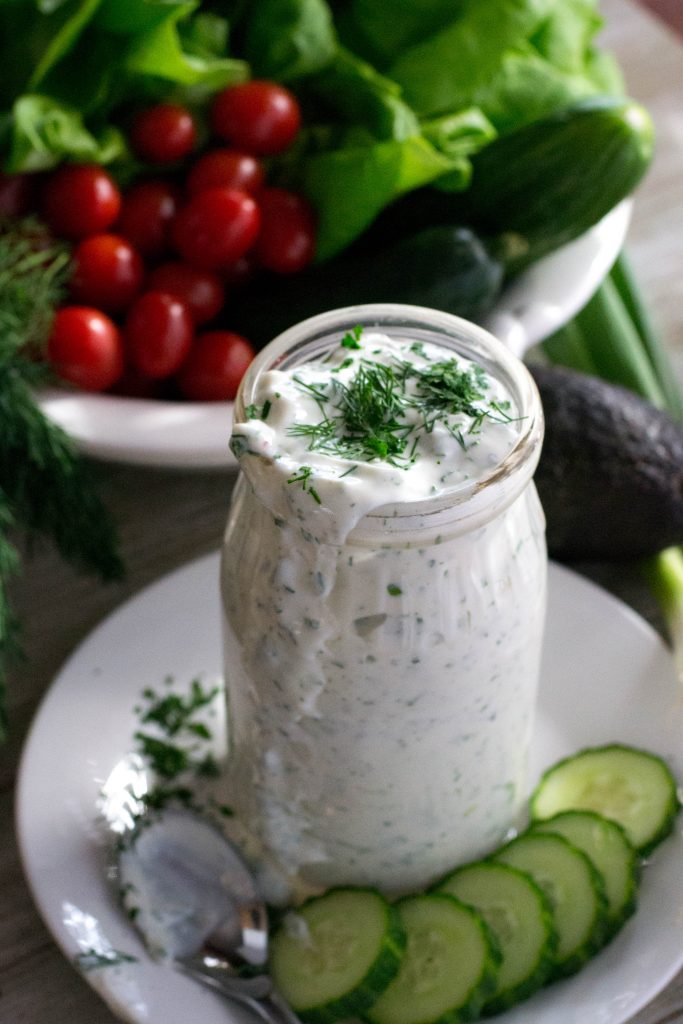 It became popular, and they began selling it in packages for customers to take home, both as a finished product and as packets of seasoning to be mixed with mayonnaise and buttermilk. As demand grew, they incorporated Hidden Valley Ranch Food Products, Inc., and opened a factory to manufacture it in larger volumes, which they first distributed to supermarkets in the Southwest, and eventually, nationwide. In October 1972, the Hidden Valley Ranch brand was bought by Clorox for $8 million.

I must admit I am not a huge ranch fan…….until now!Fresh Homemade Buttermilk Ranch Dressing is way better than bottled or the dry packet……sorry Hidden Valley. I find powdered mixes to be too salty, and the bottled while it is perfectly fine, I like to make fresh homemade if I can, and I can:) 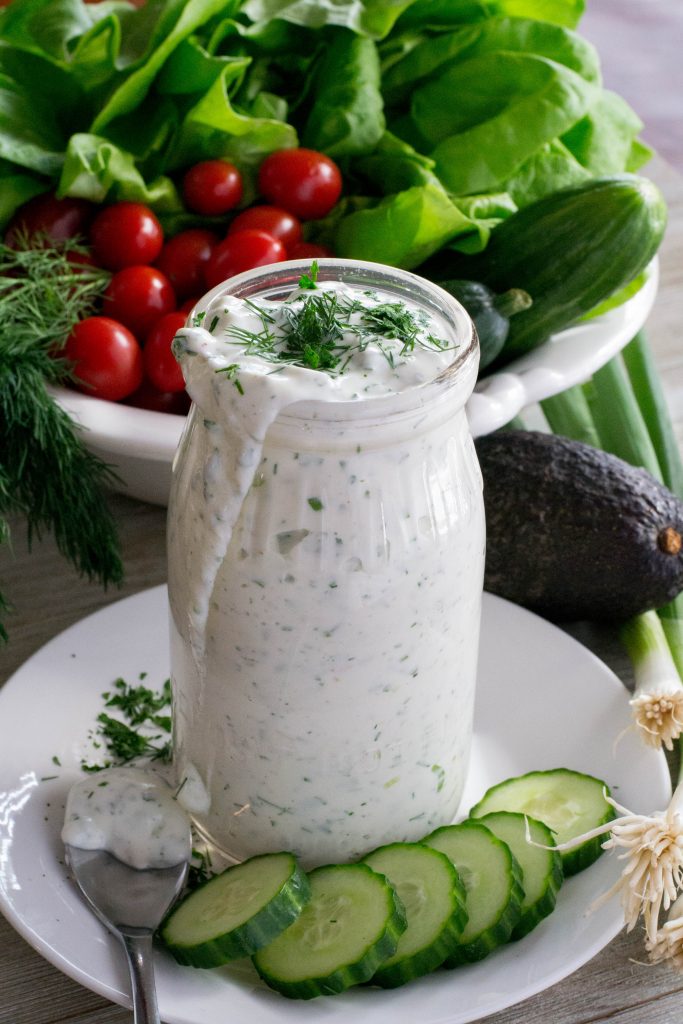 Using fresh….well everything, from buttermilk, to herbs, my only concession to something from the jarred world is Miracle Whip. as I always say mayo if you must, but I like the tang of Miracle Whip.

The dressing is easy and quick and little bit thick…tee hee……but seriously you can make this as thick or thin as you like. I made it for a broccoli recipe…stay tuned for that recipe later this week, so I wanted a slightly thicker version to use as a dip.

Adding more buttermilk a little at a time will give you whatever consistency suit you and your family. 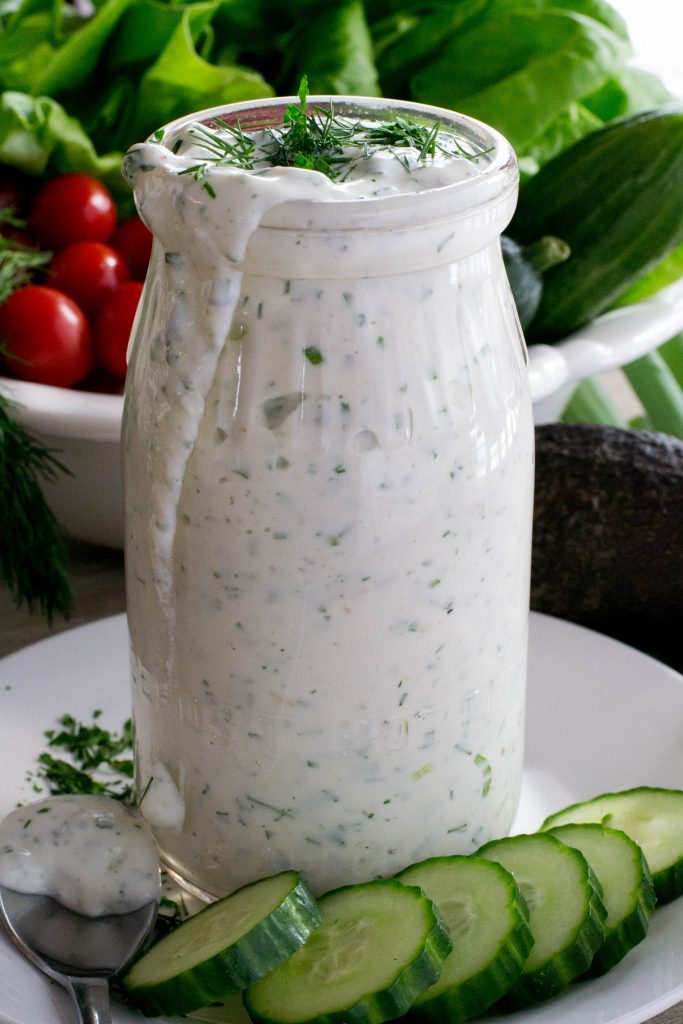 Looking for a dressing for a tossed salad, or a dip for your favorite veggies or whatever you dip in ranch, try Fresh Homemade Buttermilk Ranch Dressing!

Give up the bottle or the dry mix and make homemade ranch dressing. Full of fresh ingredients like buttermilk and fresh herbs. Quick and easy…its your new ranch dressing

In a large bowl place all dressing ingredients. Whisk until all ingredients re combined and smooth.
If you like a thinner dressing (this is a thick dressing) add buttermilk a little at a time until you reach the desired consistency.
Place dressing in a container with an airtight lid, such as a mason jar and refrigerate until ready to serve. Keep dressing up to 3 days refrigerated.

Note : You may replace fresh herbs with dried.
Dried herbs are generally more potent than fresh herbs, so you’ll need less — typically three times the amount of fresh herbs as dry. Example, if a recipe calls for 1 tablespoon of fresh oregano, you need only 1 teaspoon of dried, since 3 teaspoons equal 1 tablespoon.