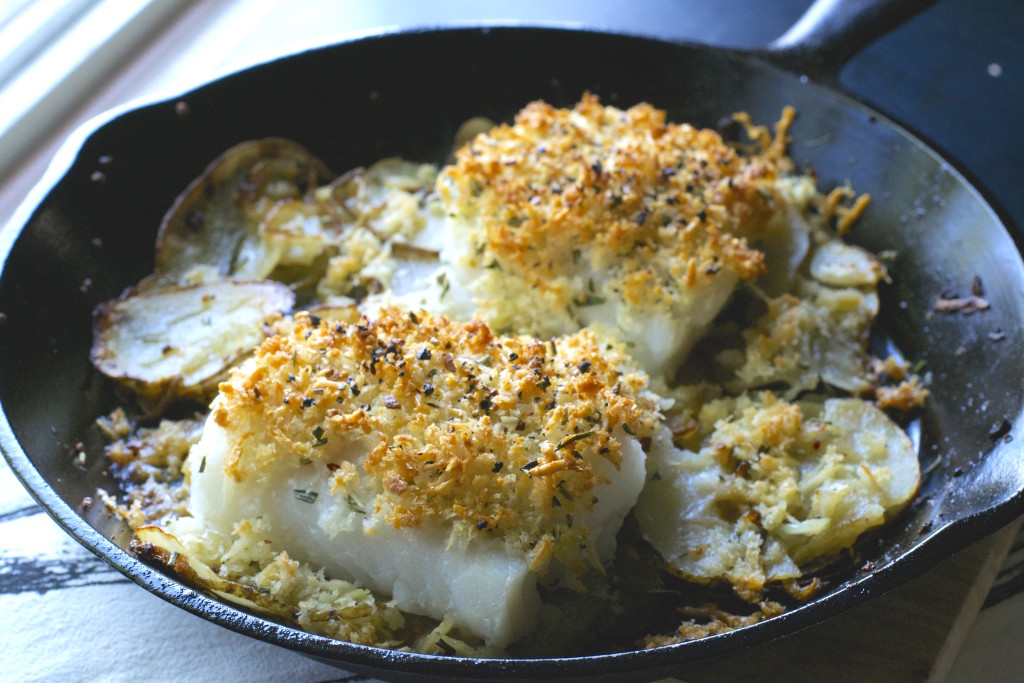 What can you make in a big fat hurry……..fish! Cast Iron Cod Potatoes and Onions.

In past posts I have mentioned that I had a ton of recipes that I thought were lost forever…….then my friend Jeanne, recovered them….she is awesome!!! This recipe is one of them.

I have had a hankering for fish lately ………. on the last grocery shopping trip I picked some up. Just some frozen fillets….nothing fancy. If the store had fresh I would have bought them but they didn’t. Anyway frozen lasts for a long time right?

Recently we seem to purchase food, and then ……stuff happens……a week later I see the (fill in the blank) that I bought, and ponder… how long it has been in my frig???? My motto…..when in doubt, throw it out!!! We sometimes throw out a lot of food…..not good!
Funny, I bought the fish frozen, so if we got distracted it would not be a problem……I used it the next day……go figure.

I was going through the old recipes and found this one for cod.The original recipe was modified to utilize my cast iron skillet #lovecastiron and reduced it to serve two. That way no leftovers to add to ……how long has that been in there???? 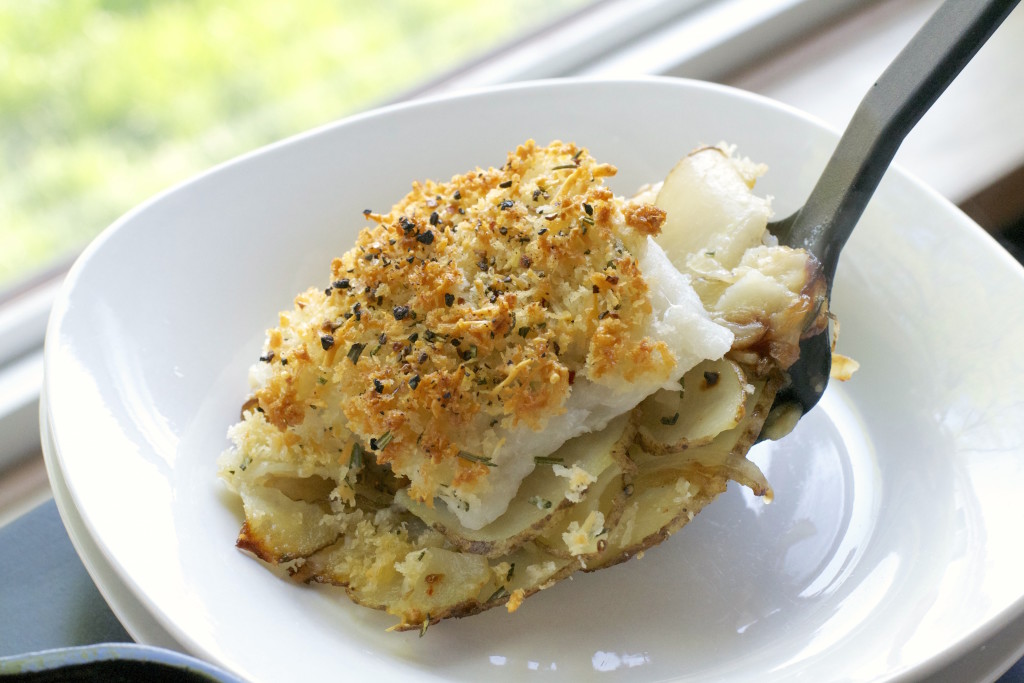 This is super duper easy to make…….even those who are the…….’I can’t cook’ winers…….you know who you are, can make this dish like a seasoned chef. You don’t even need to peel the potatoes, just wash them up and slice.
I’m going to let you in on a little secret…….don’t tell…….you know those mandoline slicers you see chefs using to slice things ubber thin???? They are super expensive but, you can buy them at Wal Mart for next to nothing…….I kidd thee not. I think I spent like $10.00 for mine, and it works like a charm. It makes quick work of slicing something thin and most important evenly.
Time to prep this meal, using of course my super mandoline was maybe 10 minutes. 10 more minutes of cooking the potatoes and onions in a cast iron skillet. 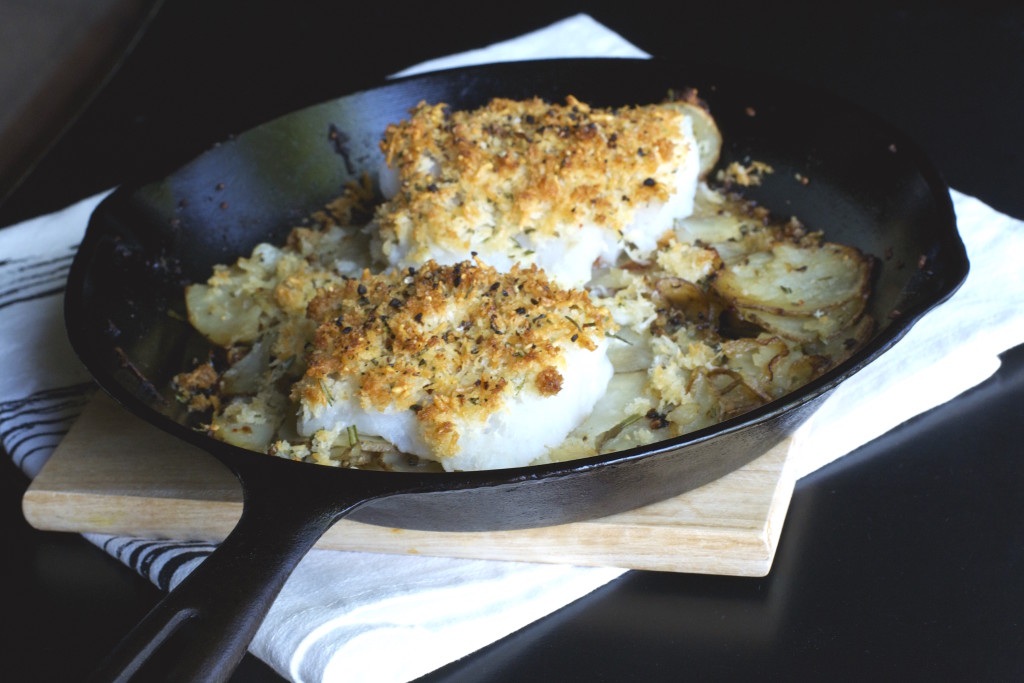 Now, if you do not have a cast iron skillet, walk don’t run to your nearest store that sells kitchen things and buy one………you are still here…. go!!!
But seriously, you can use any oven safe skillet. Once the potatoes and onions are just tender, lay the fish on top and cover them with what I think is the best topping for……well anything you want to have a crispy crunchy top. Panko crumbs and parmesan cheese will crunch you up!!!!
Then in the oven for 10-12 minutes and dinner is on the table.
Unless you run to get cast iron skillet, then your prep time will be longer…..just saying!
So, in less than a half an hour…..more or less…… you can have a home cooked , and did I mention healthy ??? meal in less time than you can shake a stick at…..
In a hurry, Cast Iron Cod Potato and Onion is the dish for you…….. 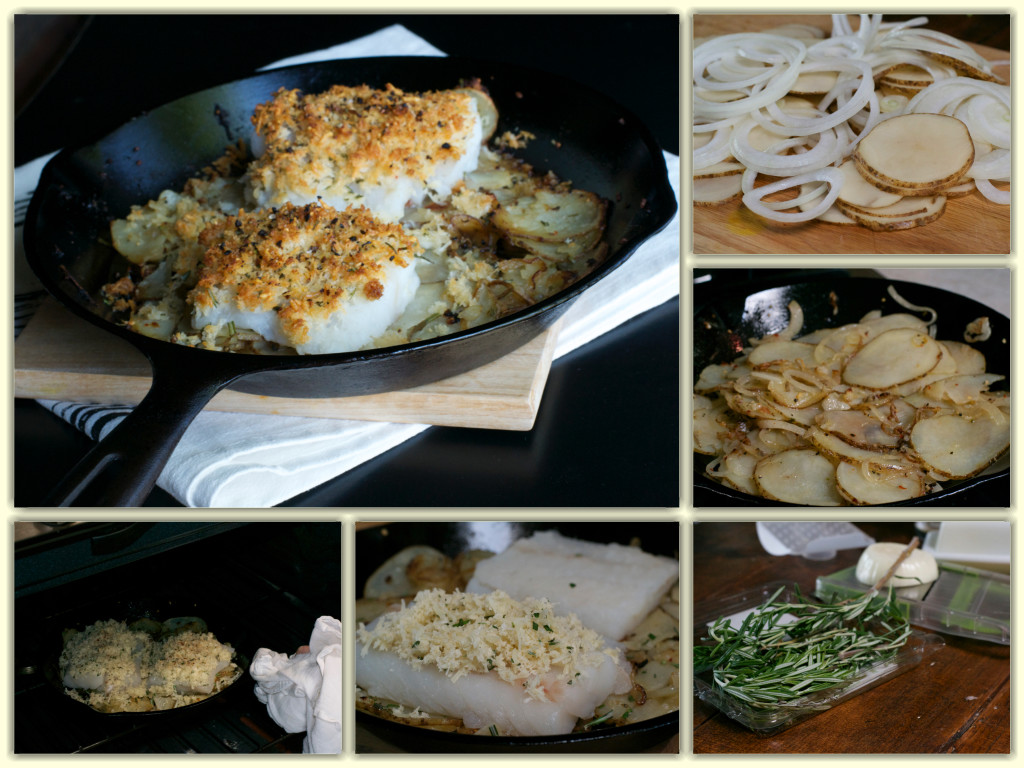