Everything old is new again…..Cauliflower Potato-ish Salad is my new version of potato-ish salad. In the post below I had made my very favorite potato salad. 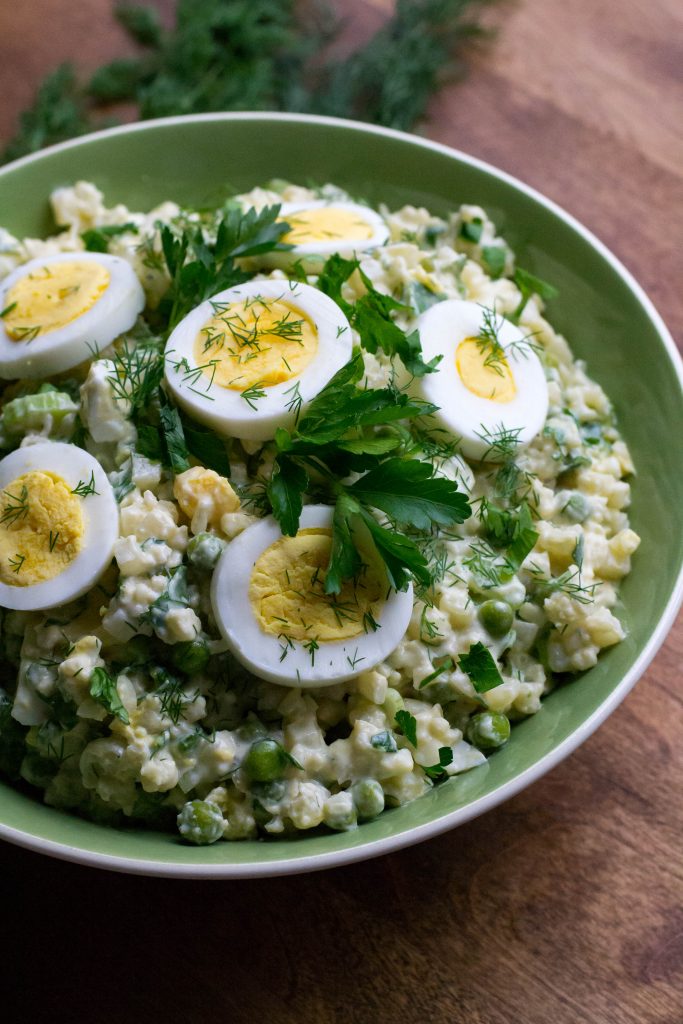 As I have mentioned in the past month or so I have joined Weight Watchers. Reformulating some of my favs to a more point friendly versions has been a challenge and fun! Plus I’ve had some really great results!

So, below is my original post, and the comments in red are the changes I made making Baby Red Potato Salad into Cauliflower Potato-ish Salad.

It didn’t stop me from making Baby Red Potato Salad. I have been making my potato salad this way for years and never wrote the recipe down……until today. Over the years it has been tweaked numerous times……I think I have it down pat! Or so I thought another tweak to the recipe…..going WW style! 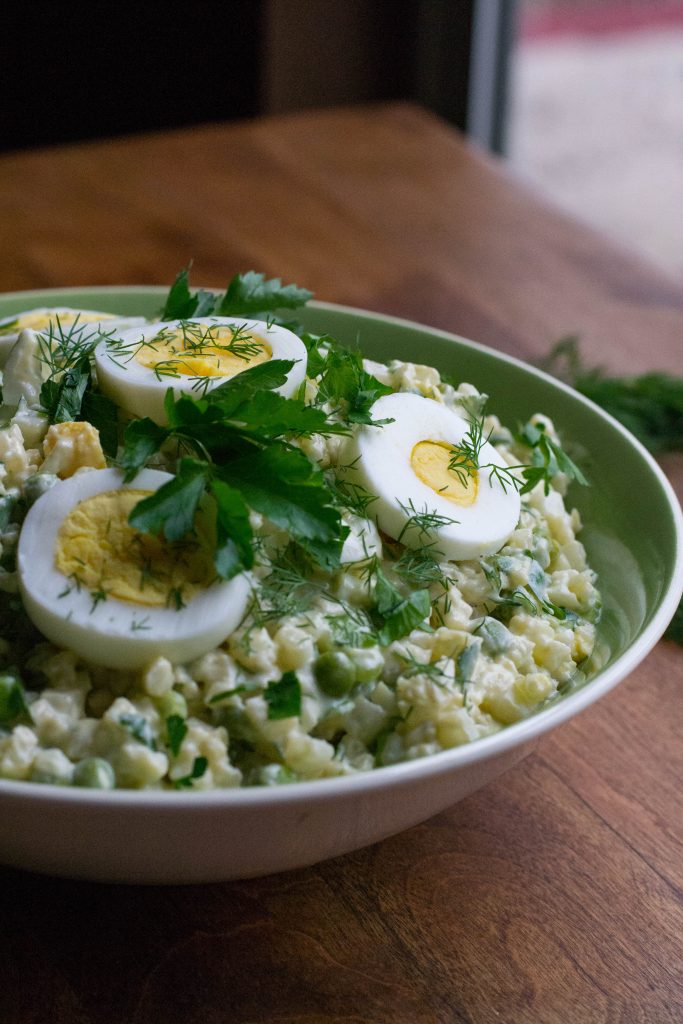 For potato salad, I like baby red potatoes. Now I like cauliflower I think they have the right texture and leaving the skin on adds a nice color. Tip for boiling the potatoes: cube them first, they cook faster, and are easier to cool down after cooking. Don’t over cook them though, they will turn to mashed potato salad and you really want the cubes….trust me! Bying pre-riced cauliflower makes this step a snap no cutting involved!

Celery is traditional in most potato salads and in mine too. Instead of regular onions I like the milder flavor and color of green onions. Hard cooked eggs are a must…….at least in my world.
The frozen peas are something I added later in the evolution of my potato salad. 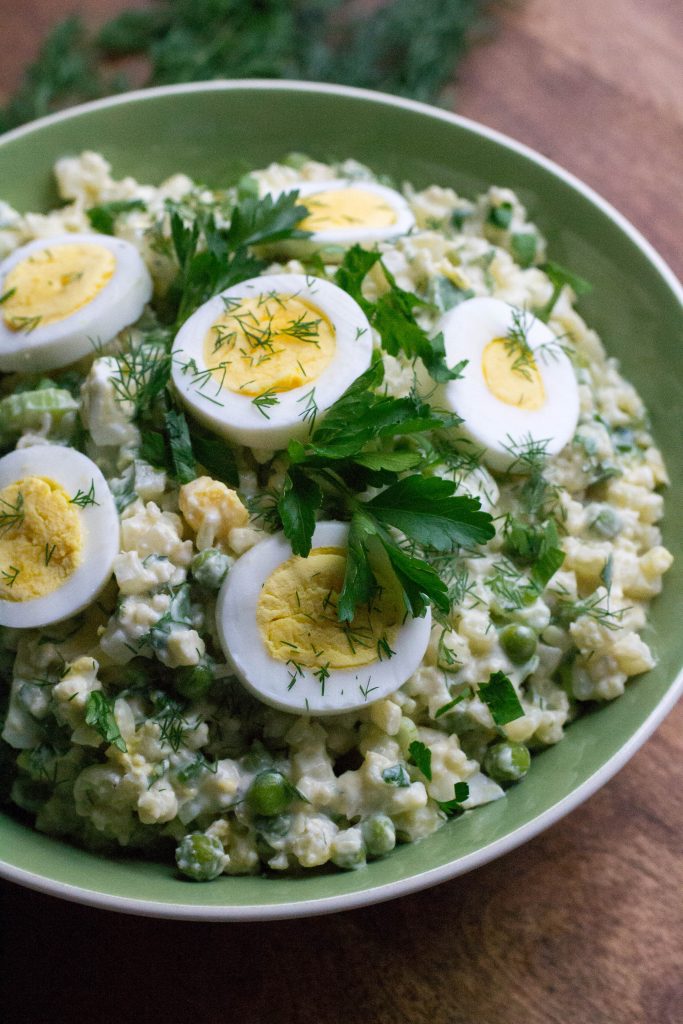 I was at a potluck a long time back and someone brought a pea salad that used frozen peas and cauliflower, I think it’s fate I liked the flavor the peas added, so I used them the next time I made potato salad….they became part of the recipe. And if you have some that say …yuck to peas……Tim says he doesn’t like them either and he loved the Baby Red Potato Salad.

Dill and parsley are a nice fresh element, something about dill and potatoes just goes together.

Dressing…..I don’t like a heavy mayo laden dressing…..we know I am all about Miracle Whip, I also like the tang that greek yogurt or sour cream adds, so I do a half and half mixture. Small tweak more yogurt, a little less Miracle Whip. A little cider vinegar and and a touch of dijon rounds out the flavors.

The key to a really good potato salad is to let it set overnight…….it marries the flavors beautifully. We couldn’t wait and ate a little bit…….you have to quality control check! 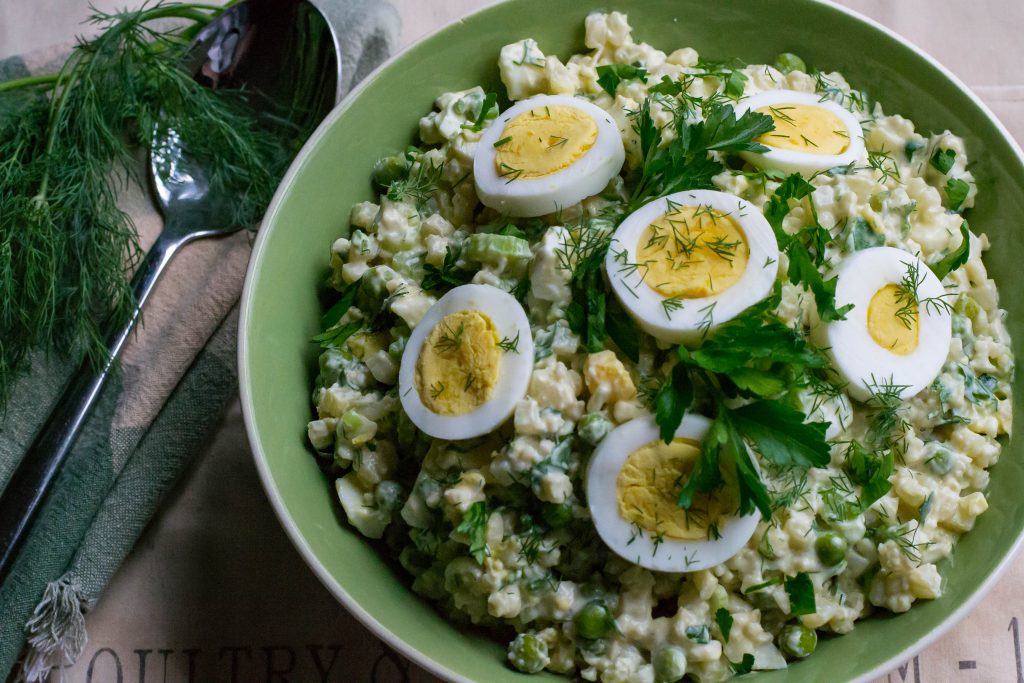 For your next backyard cookout, BBQ, or picnic try Baby Red Potato Salad or Cauliflower Potato-ish Salad…….perfect summer side!!!!

Cooking cauliflower in milk helps to keep it white.

One thought on “Cauliflower Potato-ish Salad”