Delicious, scrumptious, succulent, mouth watering, do I have your attention???
These are just a few of the words to describe the Scallop Bacon Burger… it was truly amazing!
Somethings just go together, you know, they are meant to be……like Tim and I , but thats another story.

Bacon…well it goes with almost anything. Perfect for scallops. The first time I had scallops they were wrapped in bacon and served as an appetizer. I thought they were so elegant and sophisticated…..it didn’t take much to impress my younger self. I did not grow up in a hoitty-toitty family….we were serious down-home goobers. I grew into my hoitty-toitty ways. Although still a goober at heart…… I used to tease my Mom that I must have been switched at birth, and that my rich family was looking for me. Seriously I have the best family ever and miss my Mom everyday. 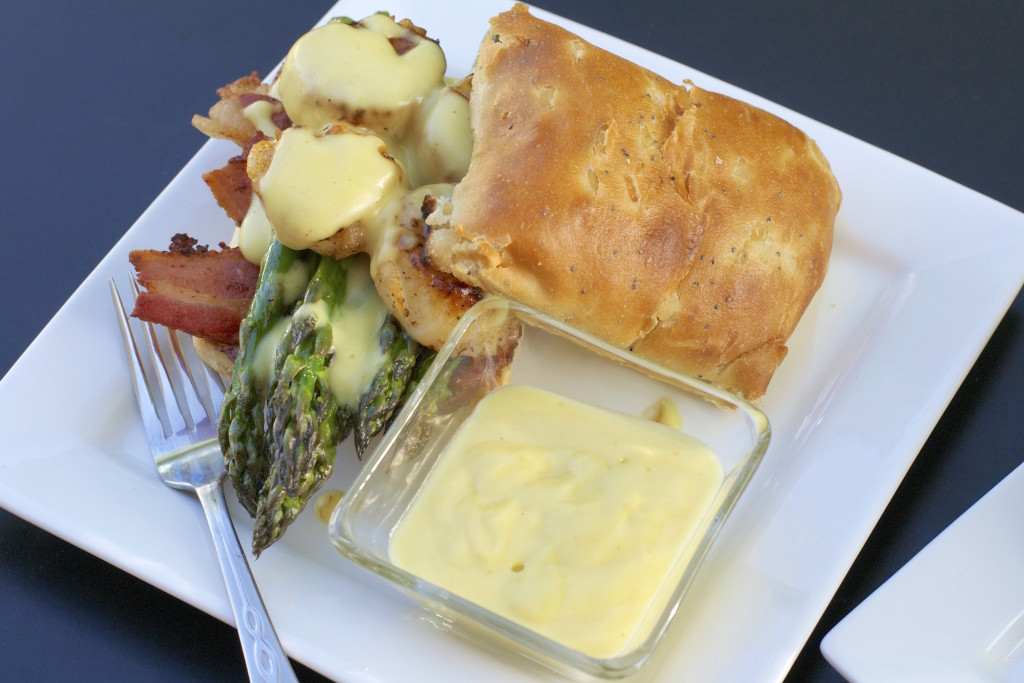 Back to the scallops……if you have never tried them DO!!! They are sweet, tender, mild, succulent, moist, and juicy….if prepared correctly. The secret is do not over-cook them…..they turn into rubber pucks…tasty rubber pucks, but rubber pucks all the same!
Last year we made Asparagus and Scallops… a beautiful dish with a white wine sauce. Scallops and asparagus go together. I am starting to see a pattern. Bacon goes with scallops, and scallops go with asparagus…….
Hollandaise sauce goes with bacon….which goes with scallops which goes with asparagus ……wow it’s like six degrees of Kevin Bacon…..its a parlour game based on the “six degrees of separation” concept, which assumes that any two people on Earth are six or fewer acquaintance links apart. 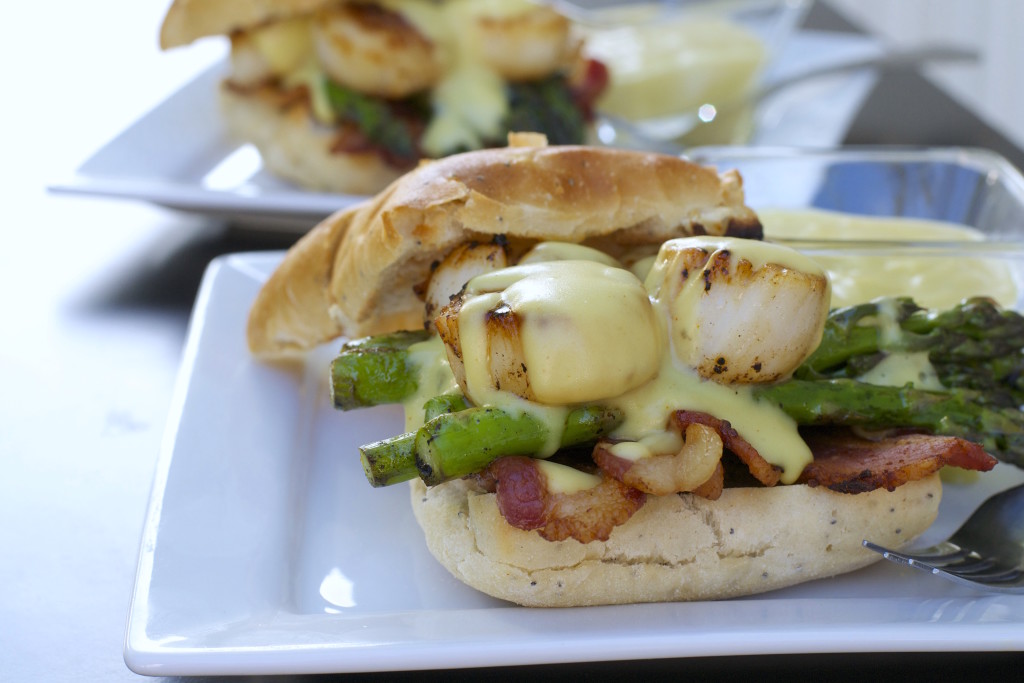 Only I don’t have six ingredients, I only have five…..so, I got to the Scallop Bacon Burger a little quicker.
The last thing was a bun…..what else but a ciabatta……Ciabatta means ‘slipper’ in Italian and describes the appearance of this oval, flattish yeast bread with an open texture and a crisp, floury crust, which toasts beautifully. Which is what I did with it. I used my toaster with its handy bagel setting….only toasts one side of the bread……brilliant!

This sandwich comes together quickly, but looks like it took a master chef and a crew of ten……ok, that is a little exaggeration, but you get the idea.
Quick step by step……cook the bacon, cook the scallops ( same pan), cook asparagus ( same pan), make hollandaise, toast ciabatta. Pile the bacon, asparagus, and scallops on toasted bread and ladle on the hollandaise ………done!
You now have your self a beautiful, quick, easy, delicious, scrumptious, succulent, mouth watering………Scallop Bacon Burger……Do I still have your attention??????

Recipe is for one sandwich. Easy made into as many as you need.