Well,we finally got some snow, and the cold to go with it!!! So I of course want something, warm and comforting……cheesy with pasta……… Asiago Spaghetti Pie! 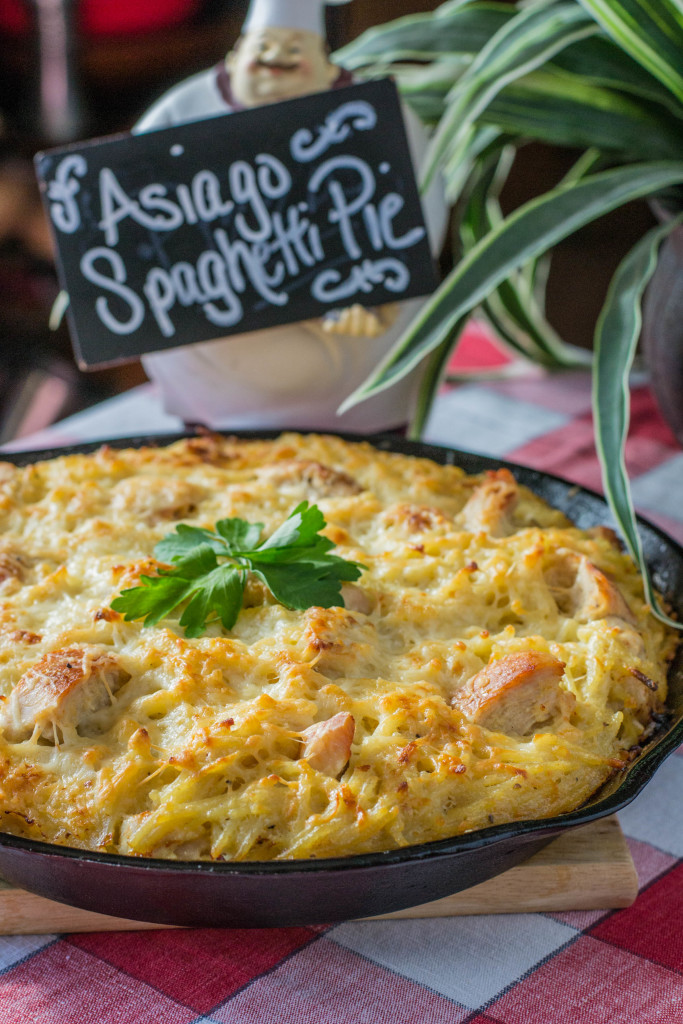 Asiago Spaghetti Pie fits the bill! Tim loves Asiago cheese, I love pasta, and we both love chicken…….perfect. Perfectly simple!! Plus, you get to turn on the oven which makes the house all toasty and warm.

Asiago Spaghetti Pie is a perfect mixture of cheeses, chicken and pasta. Ricotta, creamy white and slightly sweet in taste and Asiago, with a taste similar to Parmesan, are blended with eggs and the secret ingredient……. Marzetti’s Asiago Peppercorn Dressing….asiago with a subtle pepper flavor. The dressing adds flavor and creaminess to the Pie. 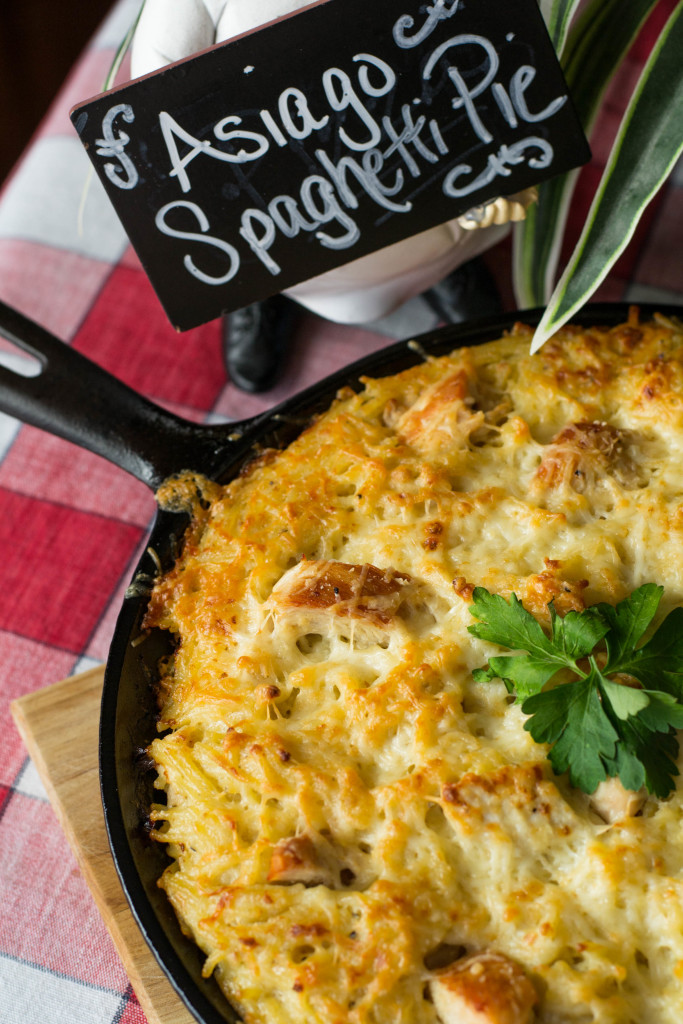 Grilled chicken breast and spaghetti are added to the cheese, egg, and dressing mixture.Then put in a cast iron skillet, or if you don’t have a cast iron skillet (get one!!), a pie plate would work perfectly. After all it is called Asiago Spaghetti Pie.

Now, I used Fideo Cut Spaghetti from Barilla. It’s spaghetti, but cut into smaller pieces, so no more fighting long strands. It would be perfect for soups too! 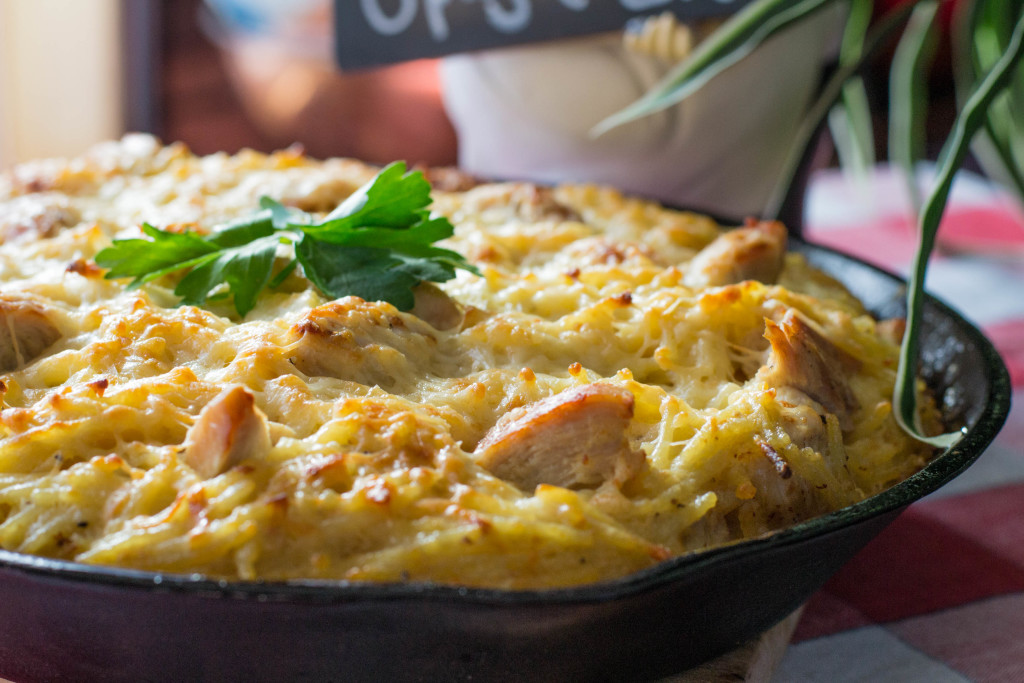 Into a preheat oven, covered for 25 – 30 minutes. Then uncover and top with the rest of the cheese and back into the oven to brown. If you want a little extra brown and crunch on top put the Pie under the broiler. But, be sure to watch it, or it will go from perfect to slightly more than golden ( burnt ) in no time.

Let the Asiago Spaghetti Pie set for about 10 minutes , like you would for a lasagna. Cut into wedges and enjoy with a green salad and crusty bread! 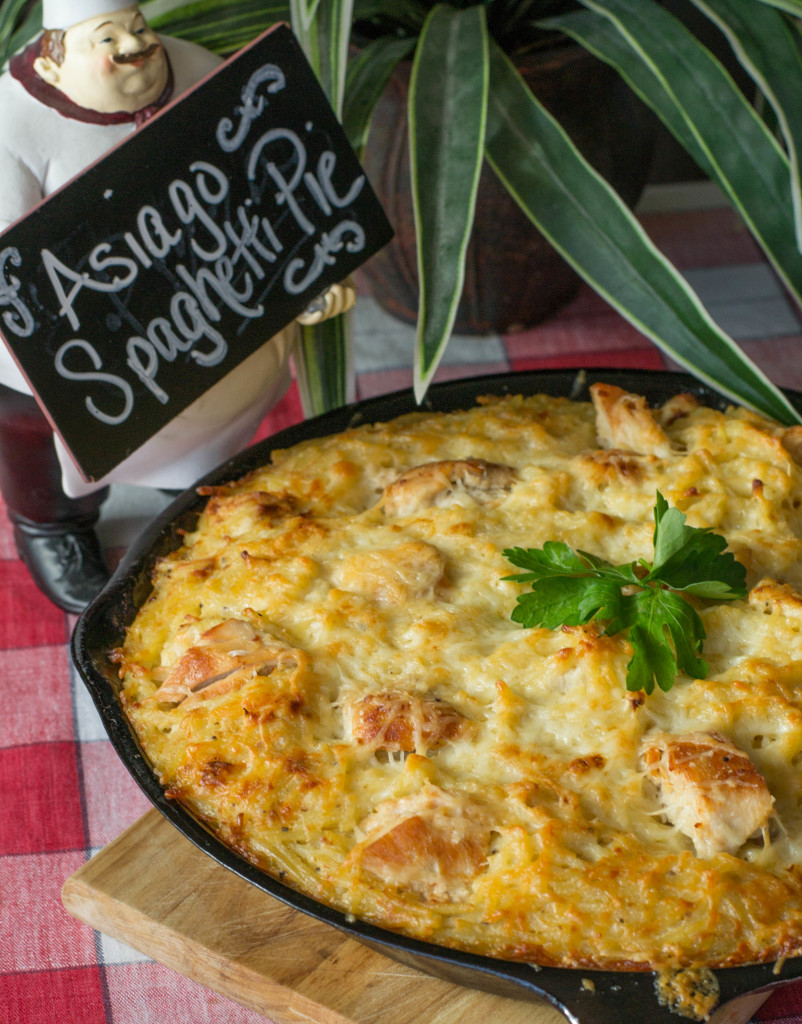 P.S. If you want to switch it up, use what every creamy dressing you like and use a different meat, like ground beef or sausage. Makes Asiago Spaghetti Pie a very versatile dish!

You can use other creamy dressings or different meats to change this recipe up.