Today is a sad day……we used the last of our asparagus….whah whah whah!!! 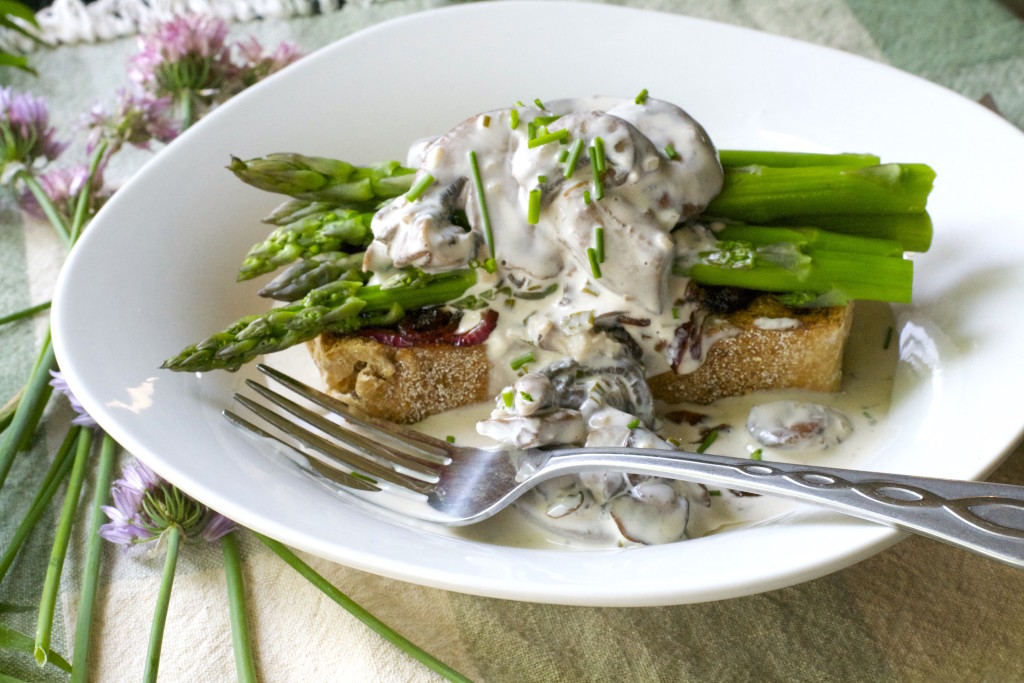 Fresh asparagus season only lasts a couple of weeks in new beds like ours. Hopefully when they are fully established we can get as much as 8 weeks. No matter the harvesting time, we enjoy it to the fullest. 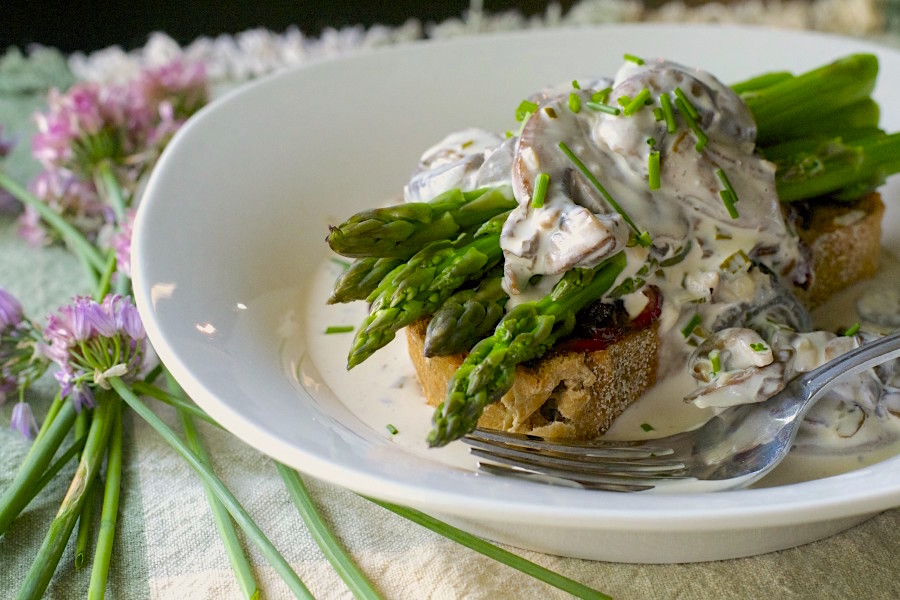 Bread…….nice crusty artesian bread, I chose a multigrain loaf. Sliced thick and toasted. That was easy.

The asparagus in my garden, easy to access. One thing I do not like, is over cooked asparagus. It should be tender crisp….not mushy. I discovered an easy way to make that happen…..a very intricate tool…….the paper plate!

That’s right…. an ordinary, everyday paper plate. I rinsed the asparagus, put it one one paper plate, and covered it with another. In the wave for 1 minute….perfectly cooked asparagus. Tender crisp, and beautifully green…… 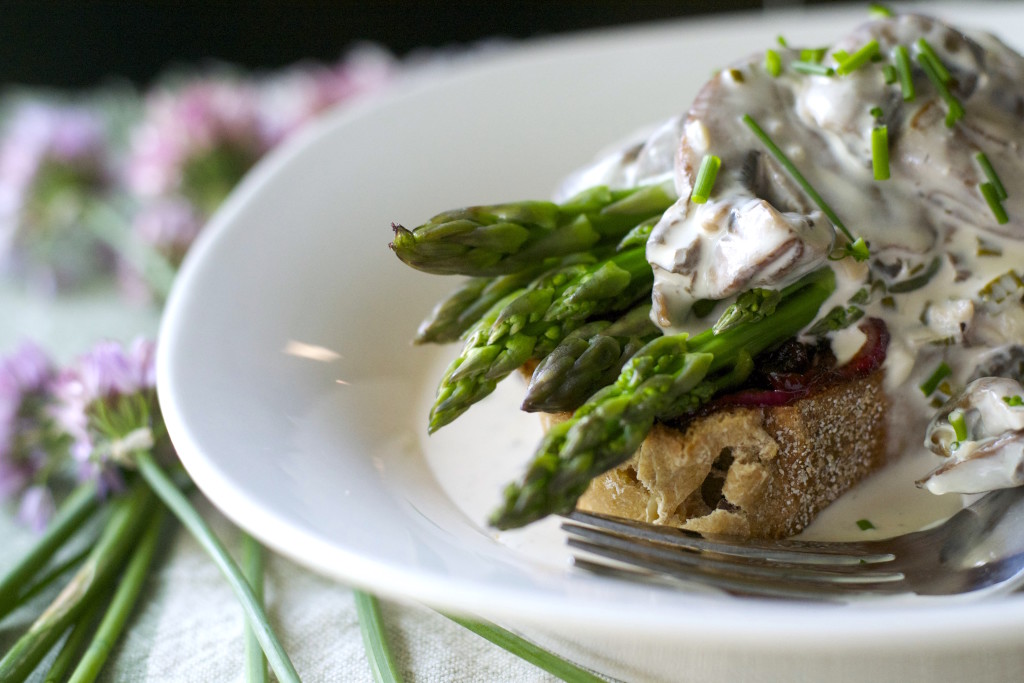 Normally, I would make a béchamel sauce….a.k.a. white sauce, add the mushrooms and asparagus and pour it over toast. But , no, no , no………the mushrooms were sautéed with garlic, and cooked until they gave off all there beautiful juices. A nice heavy cream was added and then the pièce de résistance, the flavored cream cheese. There are many flavors but chives sounded just right…and they were.

When adding the cream cheese, be sure to do it off heat. Otherwise you may have a yucky mess…..cream cheese does not take well to high heat.

The onions were an after thought……so glad I had the thought. They added that little somethin’ somethin. Balsamic vinegar and a pinch of sugar transforms onions into a sweet caramelized topping or in this case bottoming. 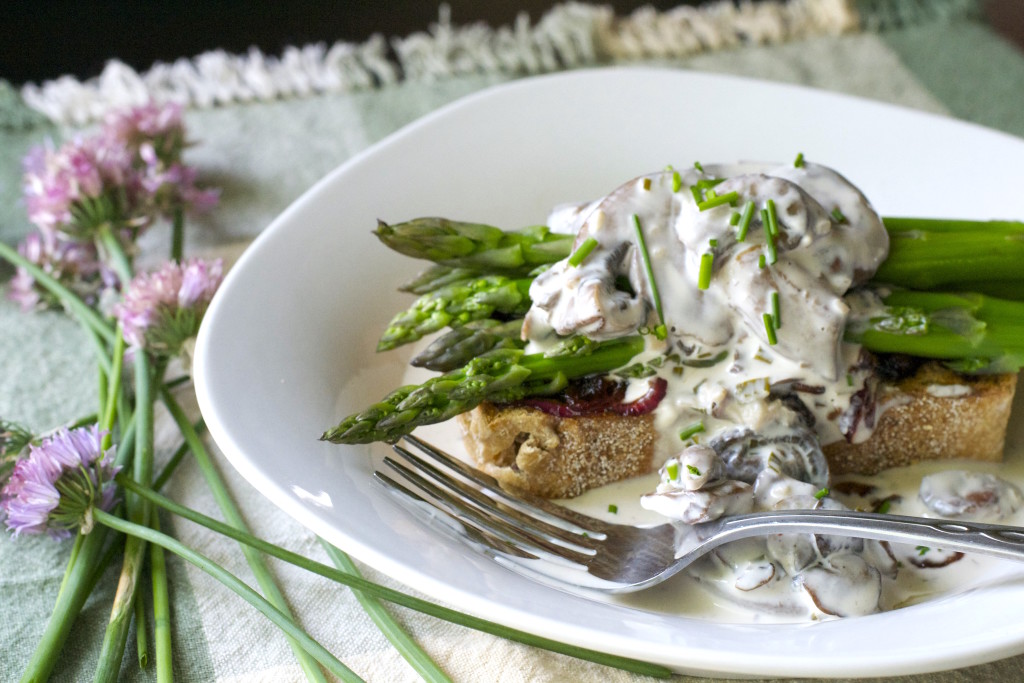 Then, it was a matter of layering…….toast, sweet yummy onions, tender crisp asparagus, and a nice big ladle of creamy chivey, mushroom gravy……….Asparagus Toast with Mushroom Gravy.

Now you can be the judge, but I think this was mission accomplished!!!
On a happy note, we found a few more stalks of asparagus…..just enough to add to some pasta maybe……off to my next mission.