The more I shop at Aldi, the more I love it. Always something new that catches my eye. This trip it was the edamame spaghetti, which has turned into Edamame Spaghetti with Shrimp (which I also purchased at Aldi, the shrimp I mean). 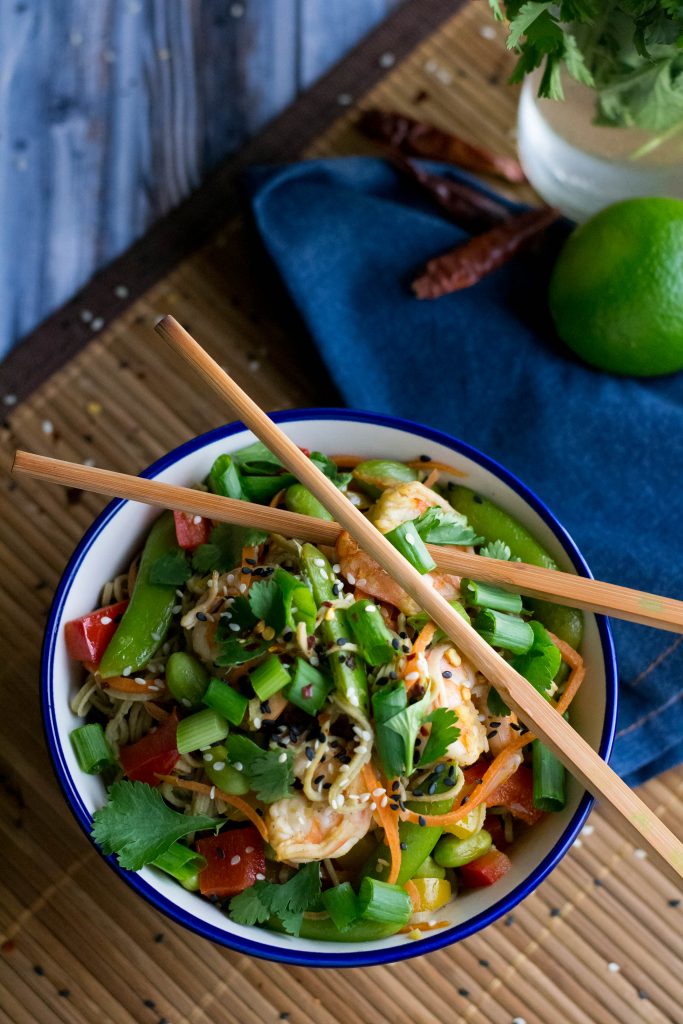 With Tim and I trying to cut carbs and sugar, I am looking for ways to still eat things we love and stay on track. We both love pasta, which is a total no-no for us. When I saw the edamame spaghetti, I was intrigued. It’s gluten-free, organic, and has a ton of protein. So, of course, I had to try it. 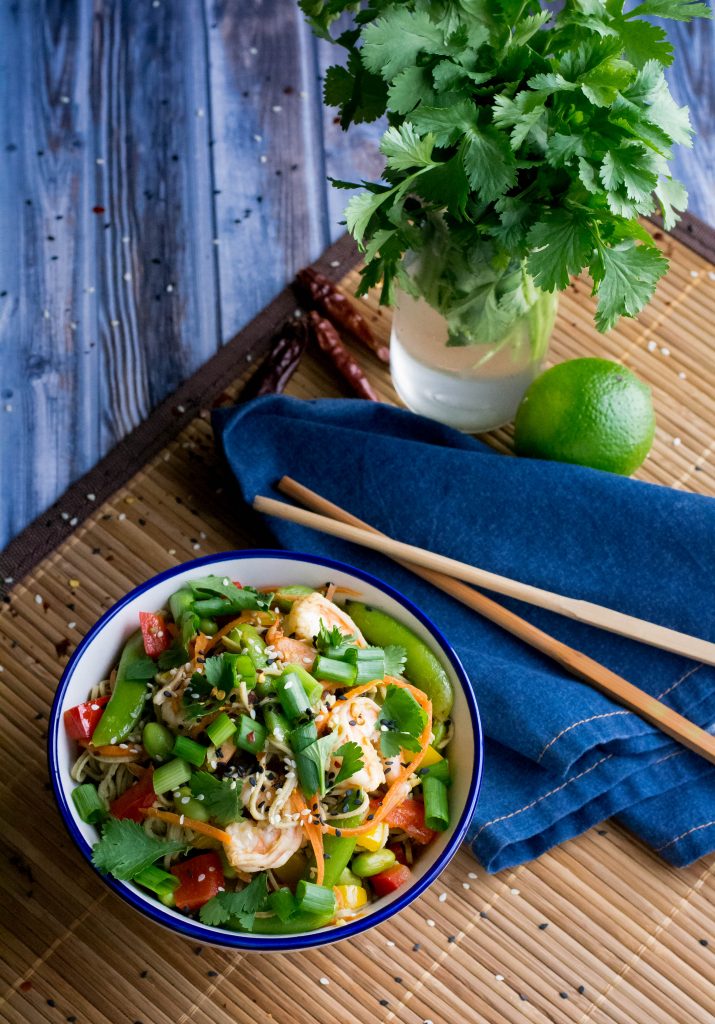 I’m not gonna lie and say it tastes just like spaghetti, cause it doesn’t, but I found it to be perfect for the recipe in my head.

Even if the “bowl” craze has passed, I’m still a fan. I like things that can be all-inclusive, a one-stop-shop if you will. Having everything in one bowl is heaven for me. 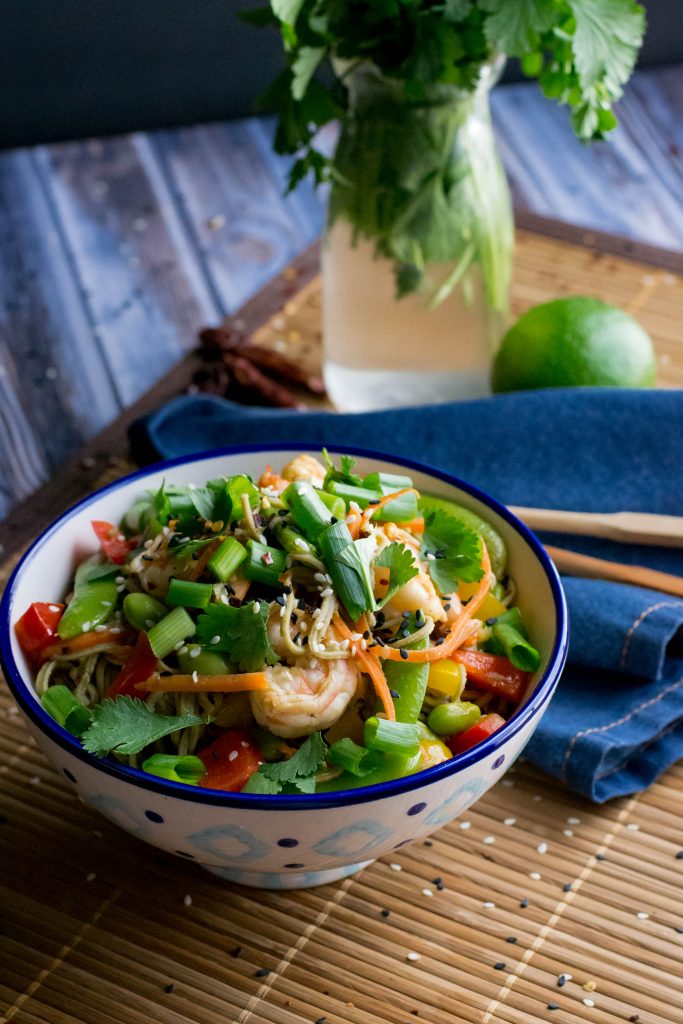 Spaghetti always stirs up the vision of a red sauce, but this spaghetti made me thing of rice noodles (another no-no), so I went the way of the Orient. Veggies, garlic, ginger, green onions, and shrimp.

Not being sure what the noodles would turn out like I did just as the package directed, and they were perfectly al dente. I also rinsed them with cold water so they wouldn’t be gummy. Also, I could focus on the stir fry part of the dish. 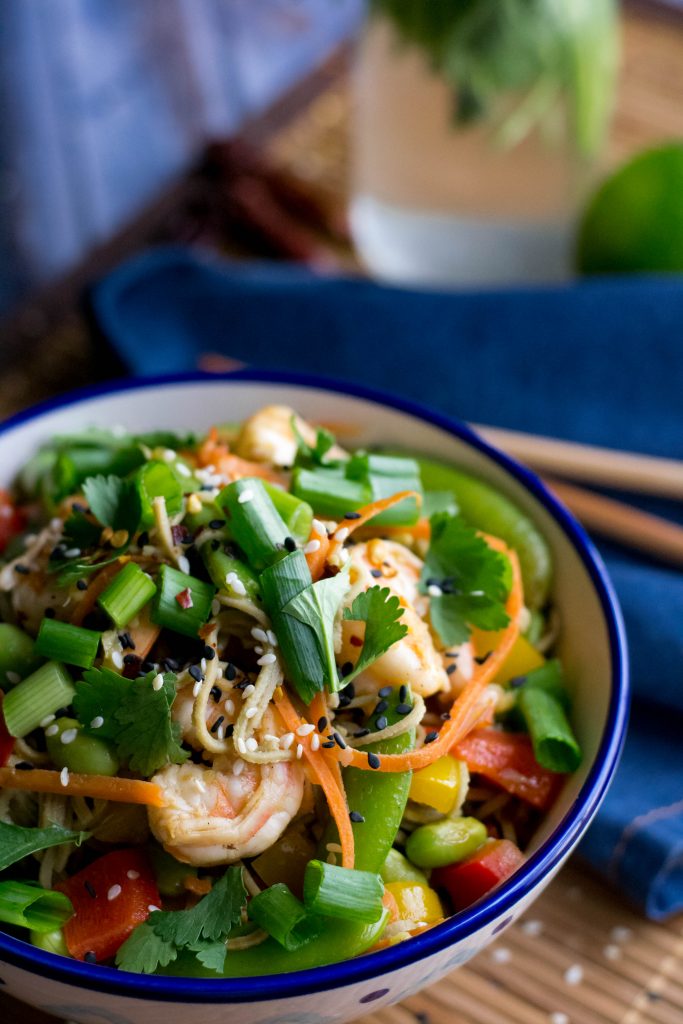 What do the edamame noodles taste like? Well, other than a slightly earthy flavor, they are bland, which for me, is good because they picked up the flavor of the sauce.

Stir-frying has been my go-to for years. Ever since I bought a Betty Crocker Chinese cookbook …..about a million years ago. If you saw that cookbook, you would cringe. It is war-torn, covered with food splatter stains, and it’s my second favorite cookbook. First being my original orange covered Betty Crocker Cookbook. Which I purchased with my Double Day Book Club membership for 1 penny…..and oh by the way …..without my Mother’s permission…..but that’s another story. 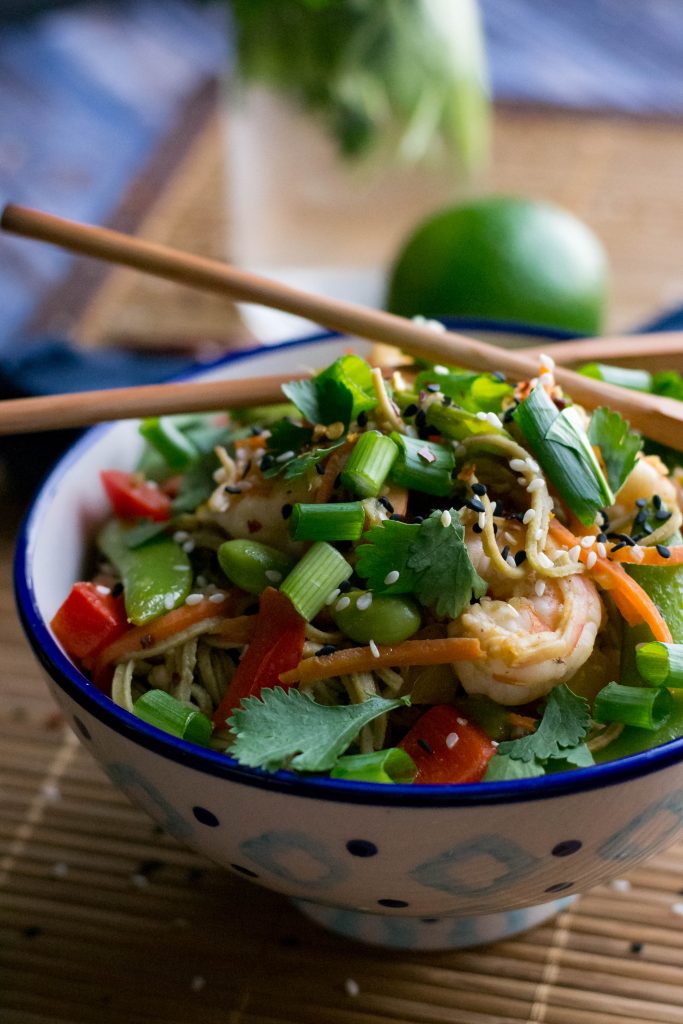 The stir-fry portion of this dish was pretty standard, shrimp, veggies, garlic, ginger, soy sauce. Adding the noodles for me was just an experiment that turned out really great! They absorbed all the flavors, and we had pasta!!!! Red pepper flakes for heat and sesame seeds for pretty and Edamame Spaghetti with Shrimp was one for the books. Garnish with cilantro if you wish….and I wished:)

All in all, my experiment with a bean noodle turned out very well. Will I purchase them again ….absolutely! Maybe next time a red sauce????