Chicken Ranch Pasta Salad with Bacon is a perfect take along for a picnic, potluck, or family reunion. 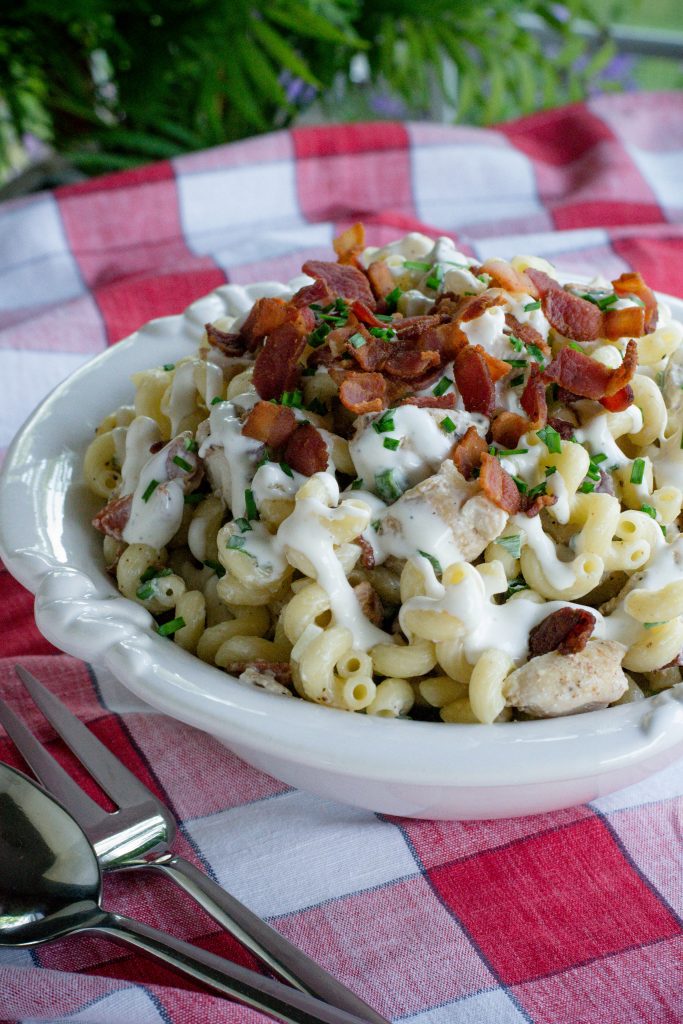 Speaking of which……every year my brother throws a party at his house under the guise of a get together/BBQ. He’s a big fat liar…..it’s a family reunion!

After his first party he said “See if you don’t call it a family reunion, everybody will show up” I’m not sure if thats true or not, but it’s always a great turn out of family and friends. We invite our friends because they are our extended family and …well the more the merrier! 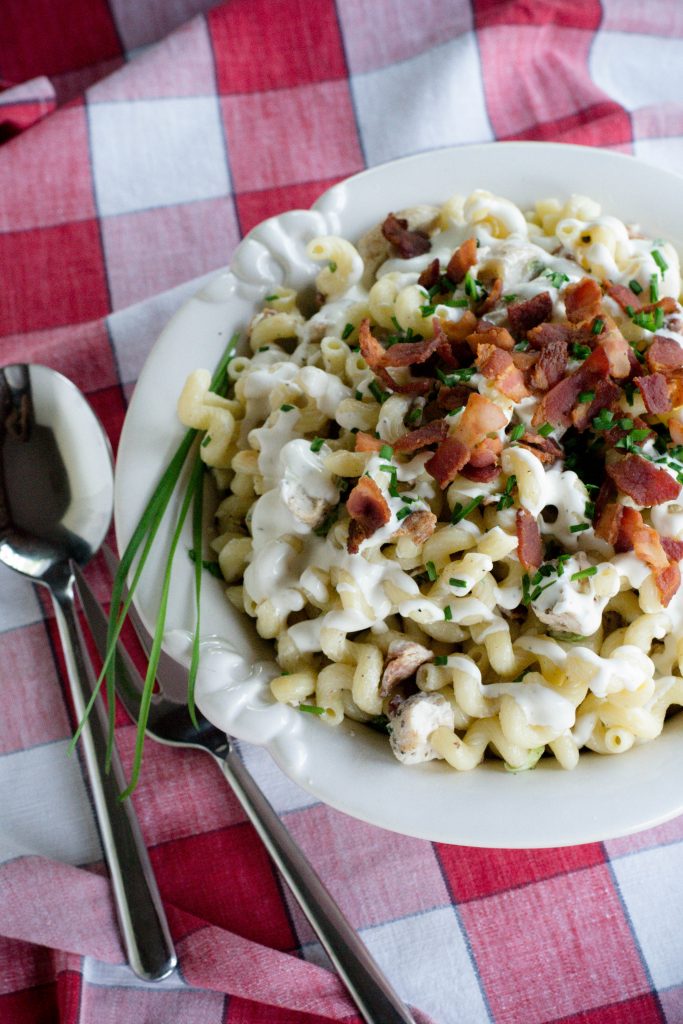 A lot has changed from that first party, but the one thing that hasn’t changed is the huge variety of delicious food. Every year it’s a feast fit for Kings and Queens.

Several things are main stay, deep fried turkey…..my nephew fried his first turkey this year…..and did a great job!! My brother always does brats and dogs. My ex-husband (yes I have an ex and yes we have remained friends, and yes Tim is fine with that) makes the best smoked bbq ribs. 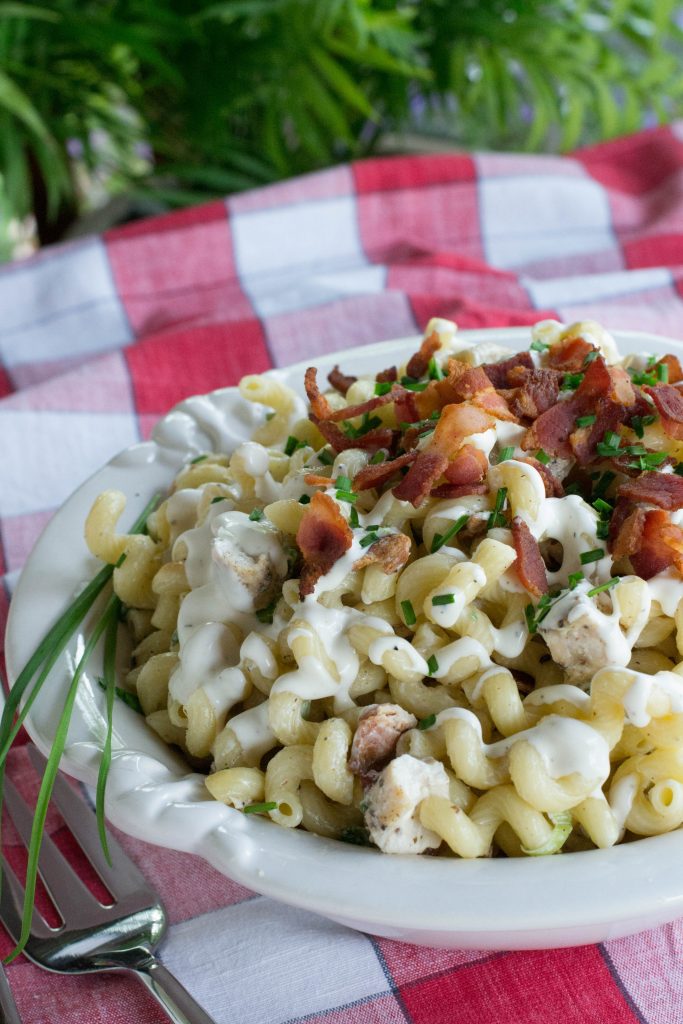 The ladies bring salads and baked beans…. you know the normal cookout fare. This year one of our friends Rene brought some black bean roll ups that were out of this world…..I will be getting that recipe….and so will you! This year we were a little light on desserts, but there were still several sweets to be had. Look for the Lemon Berry Tart recipe that I made later in the week.

I usually make one savory and one sweet dish. My sweet you will have to wait for, but the Chicken Ranch Pasta Salad with Bacon you can have now. 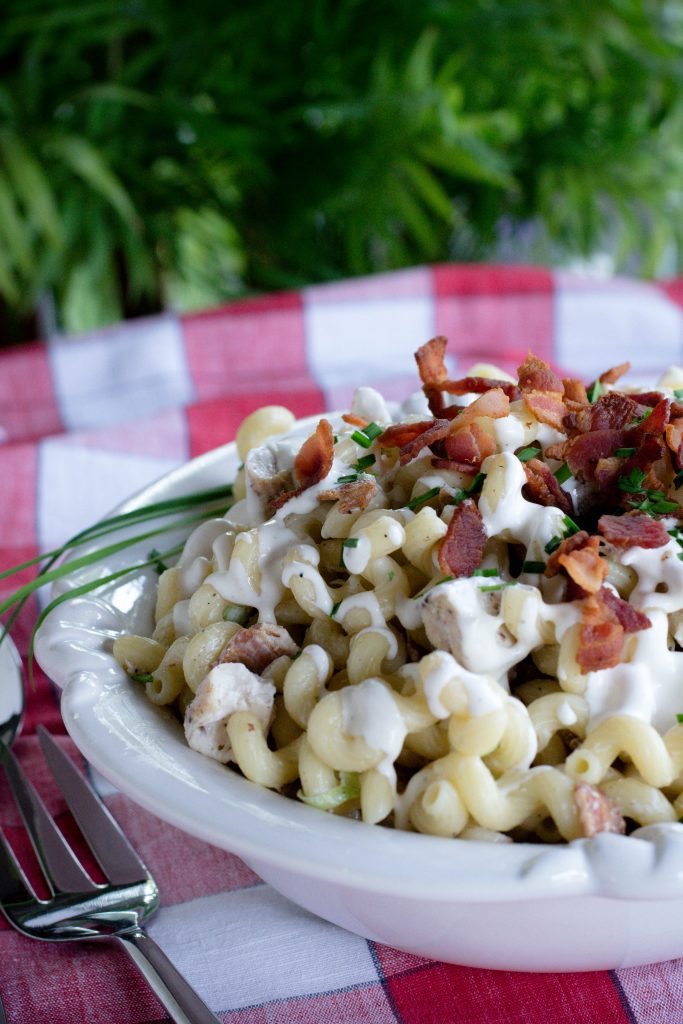 I adapted the recipe from Delish and there is a lot to love about Chicken Ranch Pasta Salad with Bacon.

First…. Ranch Dressing…According to Wikipedia, In the early 1950s, Steve Henson developed what is now known as ranch dressing while working as a plumbing contractor in the remote Alaskan bush. He and his wife Gayle opened Hidden Valley Ranch, a dude ranch near Santa Barbara, California, where they served it to guests. It became popular, and they began selling it in packages for guests to take home, both as a finished product and as packets of seasoning to be mixed with mayonnaise and buttermilk. As demand grew, they incorporated Hidden Valley Ranch Food Products, Inc., and opened a factory to manufacture it in larger volumes, which they first distributed to supermarkets in the Southwest, and eventually, nationwide. In October 1972, the Hidden Valley Ranch brand was bought by Clorox for $8 million. 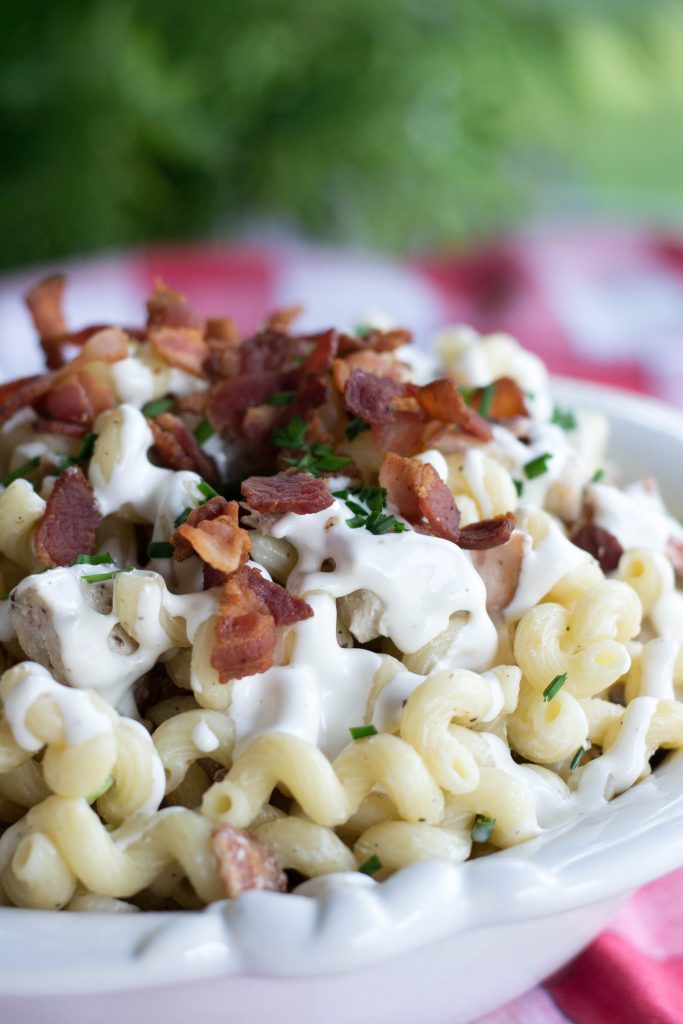 I find it interesting that while super popular in the United States and Canada, ranch dressing is virtually unknown in other parts of the world. Guess they don’t know what they are missing!

Chicken and bacon are the perfect partners for ranch dressing, add pasta and a little green onion. I put green onion in almost all my pasta salads. It gives an onion flavor without being over powering. 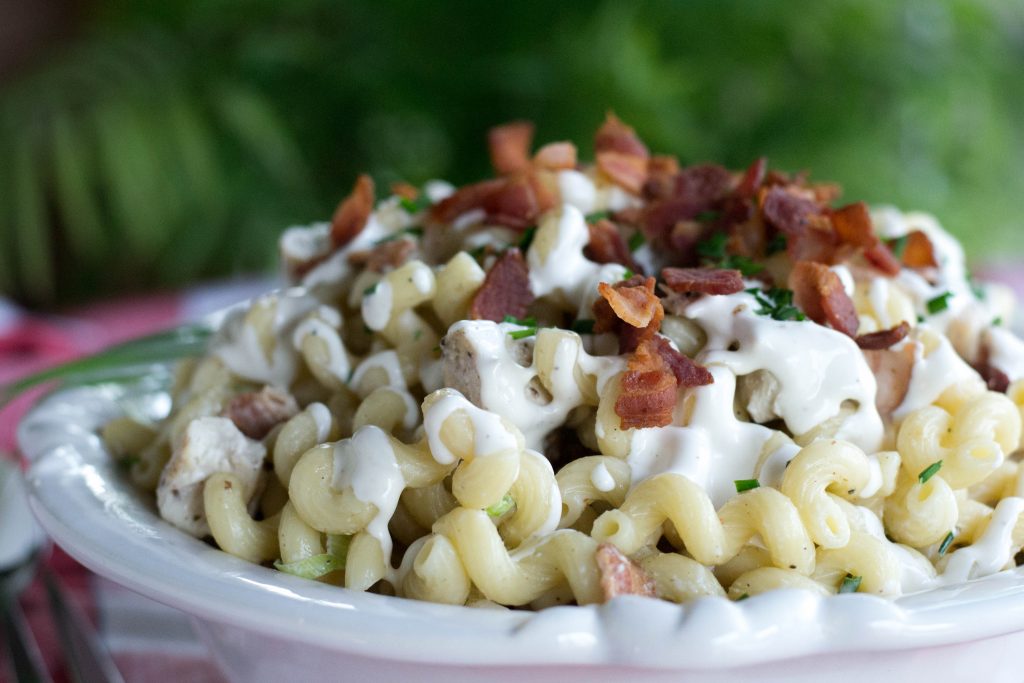 Quick, easy, and make ahead…. what could be better for your next picnic, cookout, or….sorry brother…. family reunion, than Chicken Ranch Pasta Salad with Bacon?