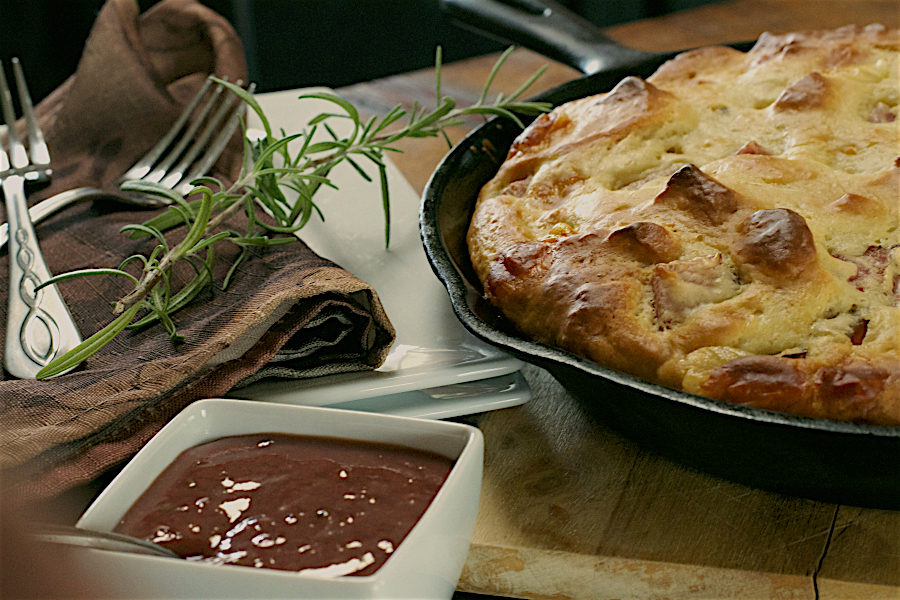 Well, the flu kept it’s hold on me all week…….ugh!

But, on a brighter note, I feel much better! So good, I made a little somethin, somethin for a snack ,which turned out to be even better for a lunch or brunch. Monte Cristo Skillet Bread!
It’s all the best things about a Monte Cristo Sandwich in a cast iron skillet.

Sometimes, in the food blog world, happy mistakes happen. I was trying my hand at making a bubble bread…….. cut up biscuits, sauce, maybe a little meat, and some cheese. These recipes are all over Pinterest.

All I had was a can of pop and fresh Italian bread, some ham, and swiss cheese. But I needed a sauce…….hmmmm. How about the egg dip you dip the sandwich in to fry it……..it could work…..maybe……and it would be baked not fried. Well, baked was good, and as my love for the cast iron skillet grows, I decided it would be a good vessel. 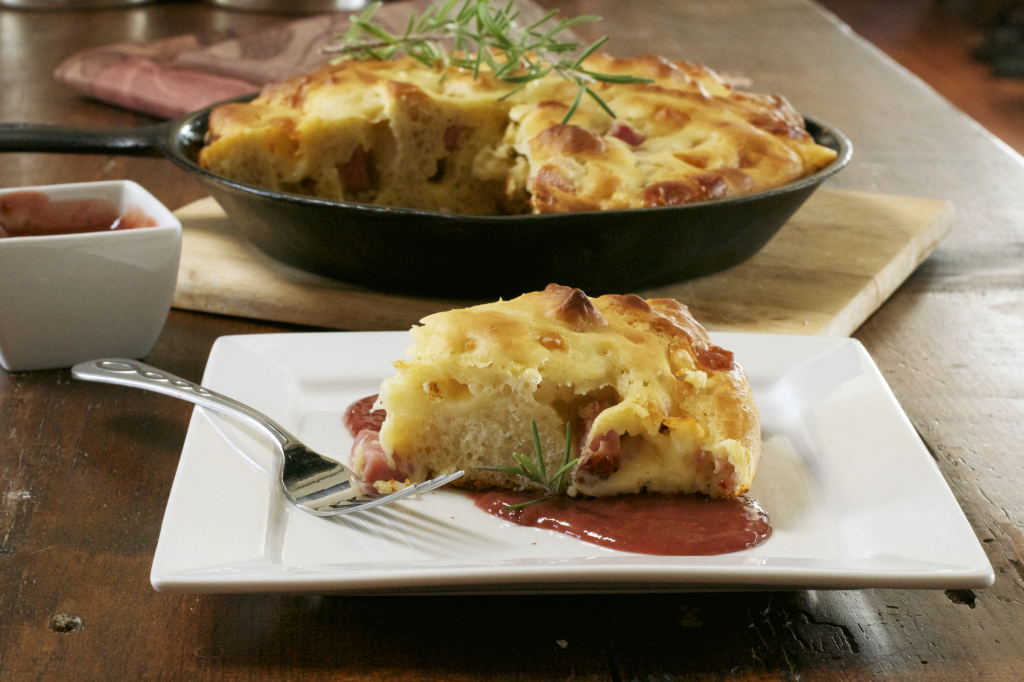 But, the egg dip for the sandwich would be kinda thin, so I added a bit of flour and some sugar for a touch of sweet. Dijon mustard for flavor……we love mustard at our house <3

I cut up the bread in fairly large chunks, cubed the ham and cheese and threw it into the bowl with the make-shift sauce, mixed it all up…..gently of course, into a cast iron skillet and into the oven. I must admit the baking time I was somewhat amazed by. It required a wayyyyyy longer time than I originally thought, but it was worth the wait!

While it was baking I kept thinking, it should have a dip? Monte Cristo Sandwiches are served many times with raspberry jam and dusted with powered sugar. I still like mustard with ham and swiss……..hey……what if I mixed the two together??? How sweet it was, adding just a bit of fresh rosemary……yum!

After letting the bread cool for just a few minutes, I realized my dream of a Bubble Bread was not going to come together, I cut wedges instead. A smear of the raspberry-dijon on a plate…….a little on the side for dipping. Monte Cristo Skillet Bread. Tim loved the raspberry-dijon dip which we both decided will have a place in another recipe. 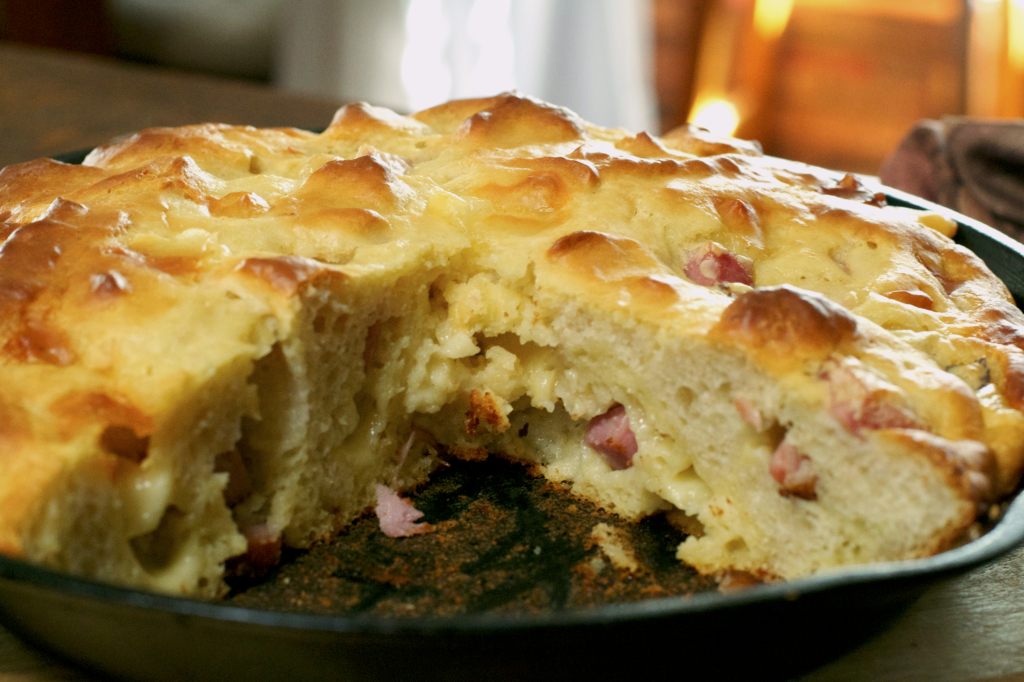 Now, this had a bonus for us…. I figured you could cut the bread into 8 – 16 pieces, depending on how you were serving it,how many you were serving, and if you had other stuff along side. We just ate it for a snack, so there was quite a bit left over………Grab and Go Breakfast……..yeah, just a quick zap in the wave and out the door you go. Now, I do not recommend the sauce for this……..cause if you are like me a drip will find it’s way to the front of your shirt every time!!!

No matter what you are serving this for ………lunch, brunch, snack or grab and go breakfast…try it ….you’ll like it!!! 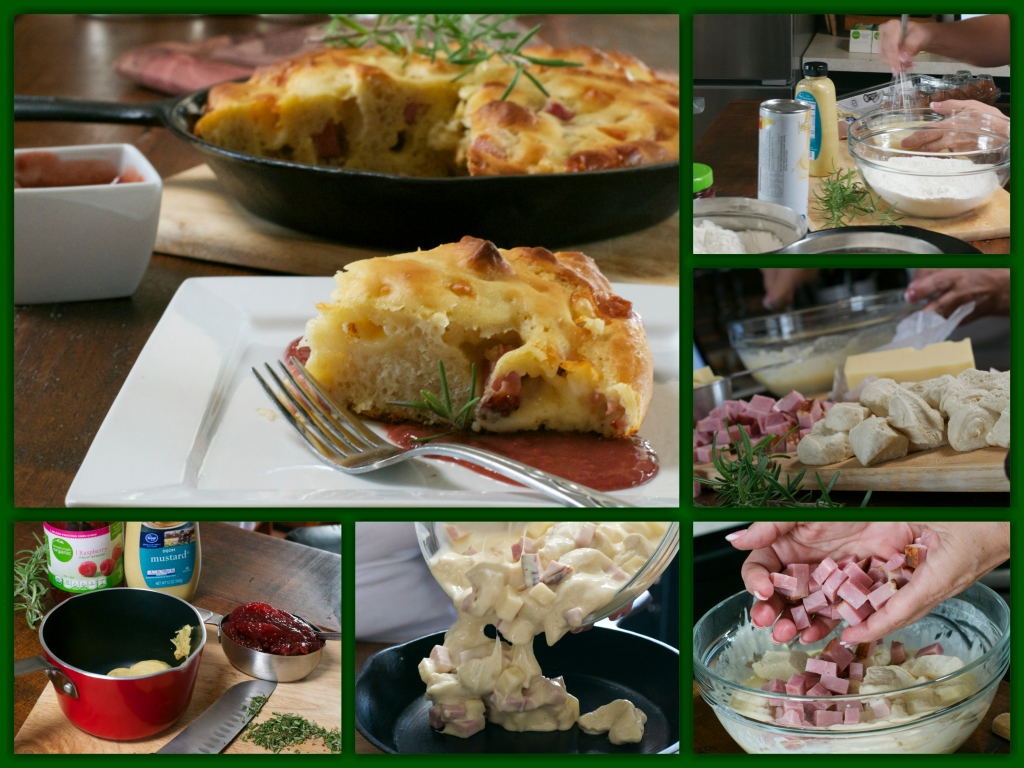 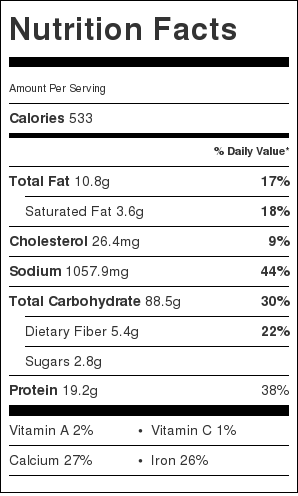