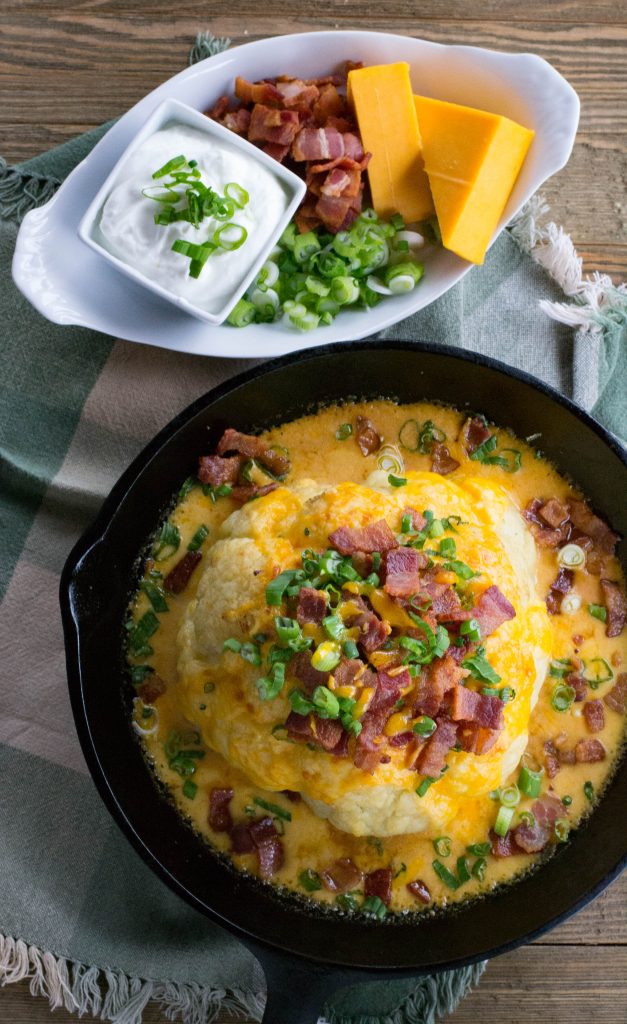 Cauliflower is still a shinning star in the food world. Pearly white heads of chunky florets, just begging for new recipes. Whole, in florets, mashed, or riced, the possibilities are endless.

I’m not sure if I have told this story before….after almost five years, I may have started to repeat….or maybe its old timers. 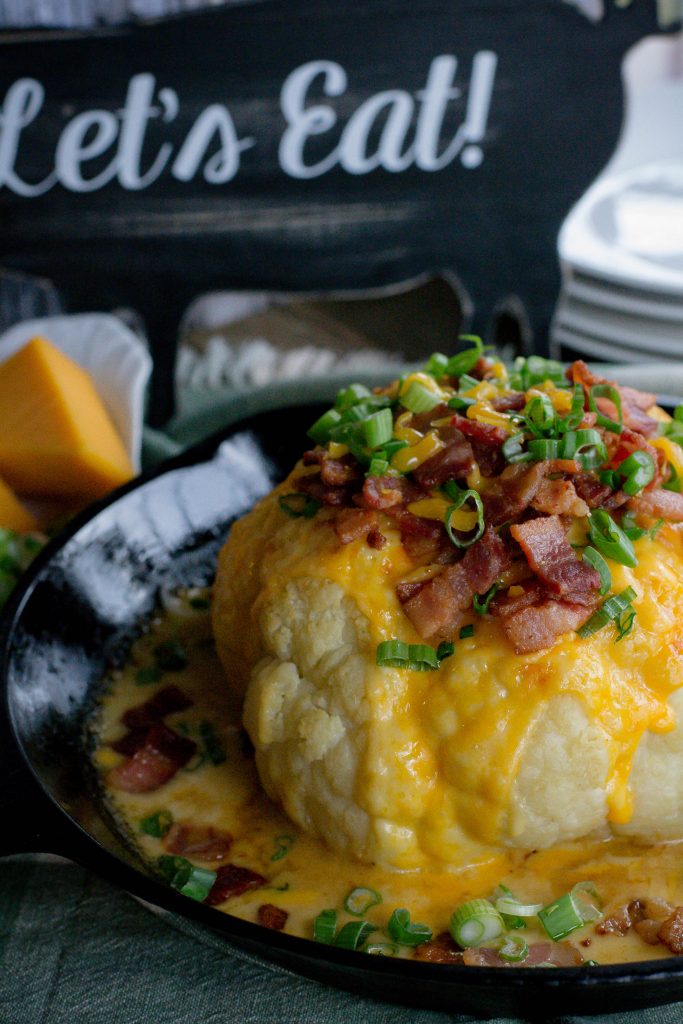 When I was kid, we all went over the river and through the woods to Grandmothers house. Ok, we did go over a river, but she didn’t live in the woods, and we called her Grandma. Anyway, Holidays were spent at her house, and she cooked. My Grandma was an awesome cook, you know the old fashioned, down home kind of cook <3.

No matter what the occasion, my Grandma cooked a whole head of cauliflower and covered it with cheese sauce. Now being the “old fashioned cook” she was, all food veggie or meat had to be throughly cooked….in the case of the cauliflower…boiled to death. As a kid I wouldn’t have touched the cauliflower! As a child if it wasn’t corn, beans, or peas, and in that order…..I wasn’t gonna touch it. And it has a certain distinct odor that I found offensive. 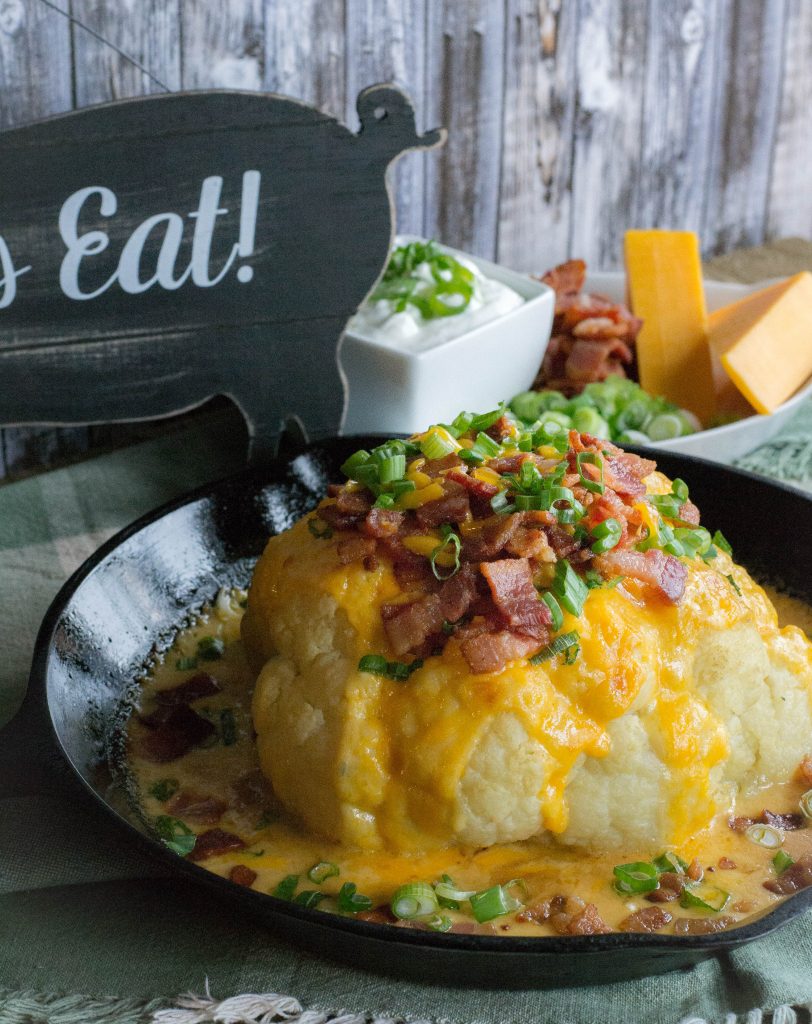 The cheese sauce on the other hand was delicious! I never paid attention to how she made it, but I know it had velvetta cheese and milk. All of us kids covered our potatoes with it.

Fast forward a lot of years, and I love cauliflower. Cover it with cheese and I’m in heaven. Add bacon…utopia!

Cauliflower is a natural substitute for potatoes. You can mash it with cheese and milk and I swear, it tastes just like mashed potatoes. So why not use it for a take on potato skins. 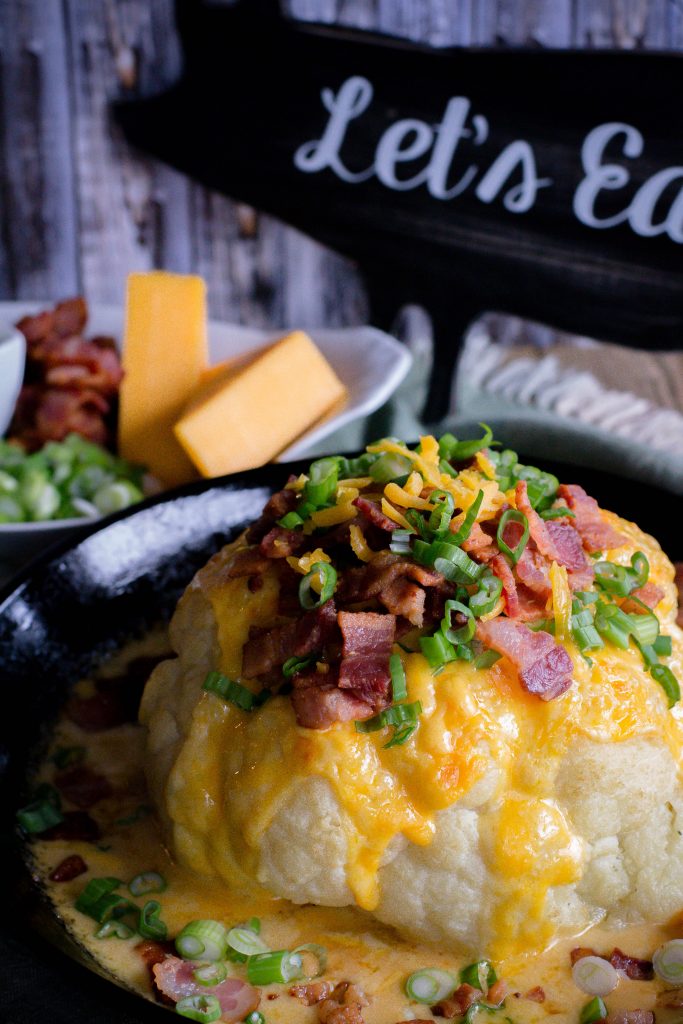 Although it looks like it may be complicated, it’s easy to make. It does take a bit of time, but the end result is worth it.

Transfer the whole head of cauliflower to a cast iron skillet. Cast iron skillets make a great presentation for any food. Cover the cauliflower with beer cheese sauce. Beer gives the cheese sauce a warm, earthy flavo with just hint of beer taste (the alcohol cooks out). Flavor can vary depending on the type of beer you use…chose your favorite. 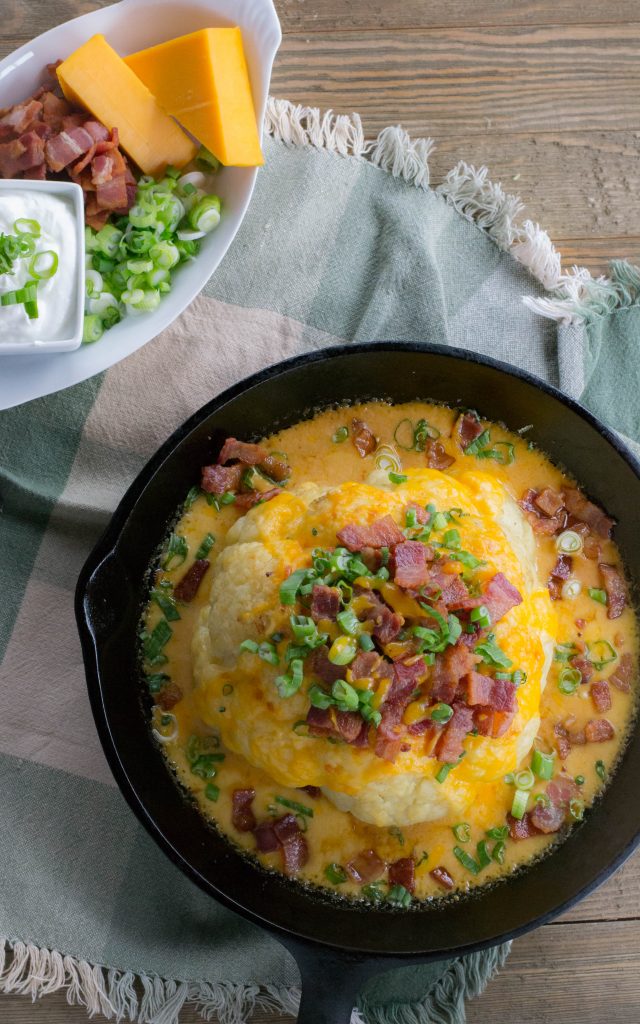 Top with more shredded cheese and roast for about 15 minutes. To serve just cut into wedges and serve with all those loaded potato skin toppings. Bacon, green onions, sour cream, and more cheese. 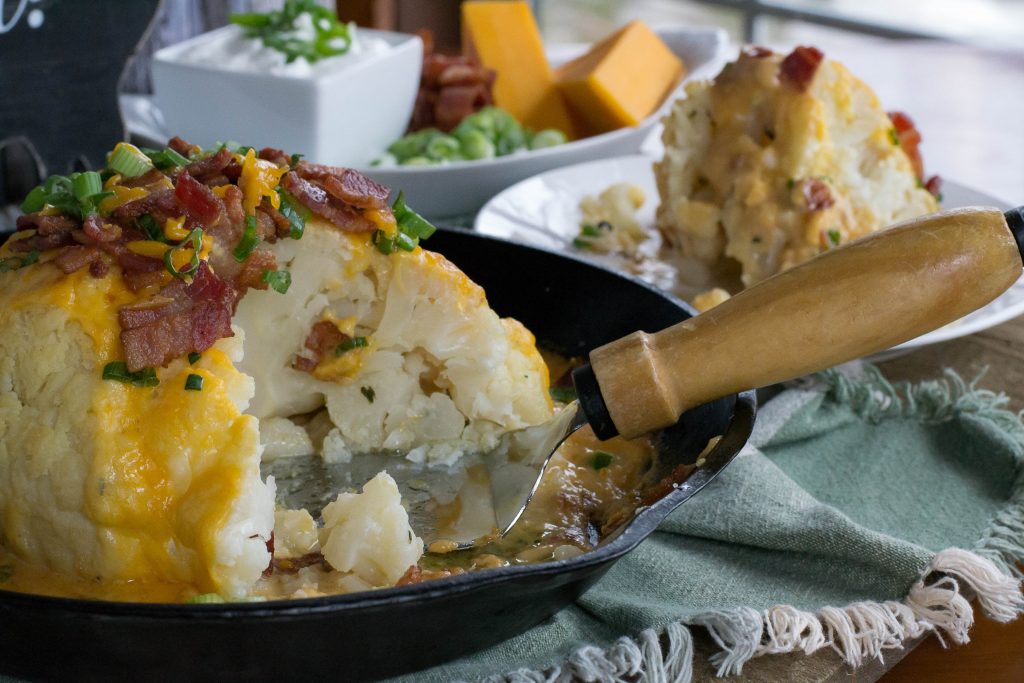 Place the whole cauliflower in a pot large enough to hold the cauliflower and the liquid. Add the stock, thyme ( you can just toss in the whole sprig as it will be remove after cooking), bay leaves, peppercorns, and milk. Adding milk keeps the cauliflower white. Bring to a boil and reduce heat and simmer for about 12 minutes.

While the cauliflower cooks make the beer cheese sauce. In a medium sauce pan bring the beer to a simmer, add the cream and cheddar cheese. Whisk continually until both cheese are melted and smooth. Set aside.

Transfer the cauliflower head to a cast iron skillet, removing the thyme, bay leaves, and peppercorn.

Pour the beer cheese sauce over the cauliflower and sprinkle 1/2 cup shredded cheddar cheese on top. Place in preheat oven for 10-15 minutes or until the shredded cheese is melted and beginning to brown.

Remove from oven and top with bacon and green onions.